Tensor Calculus and the Calculus of Moving Surfaces 48 lectures | 68,910 views

Calculus Revisited is a series of videos and related resources that covers the materials normally found in a freshman-level introductory calculus course. The series was first released in 1970 as a way for people to review the essentials of calculus. It is equally valuable for students who are learning calculus for the first time.

Part I: Sets, Functions, and Limits
In its most common usage, a “set” is any collection of objects and a “function” is simply a rule that that assigns members of one set to members of another set. As an everyday non-mathematical example, consider the situation in which a teacher assigns grades to students. In this case, the teacher is the function that assigns to each member in the set of students a letter in the set whose members are A, B, C, D and F. While the study of sets and functions is important in all computational mathematics courses, it is the study of limits that distinguishes the study of calculus from the study of precalculus. What this means is the topic of Part I of this course.

Part II: Differentiation
In this part of our course, we introduce the concept of instantaneous rates of change. At the pre-calculus level, the study of constant and average rates of change are introduced as early as elementary school when students start working with fractions. However, in many real-life applications (such as the speed at which an automobile travels), rates are not constant and it becomes important to study instantaneous rates of change. Differential calculus is the branch of mathematics that deals with this topic.

Part III: The Circular Functions
In its original form, trigonometry quantified the relationship between the sides and angles of a triangle and was a branch of geometry that was used extensively in the study of surveying and later in astronomy. As time went on, it was discovered that the properties of the trigonometric functions had much broader applications to such cyclic phenomenon as simple harmonic motion and sound waves. It is in this context that the circular functions are introduced as an outgrowth or extension of the trigonometric functions.

Part VI: More Integration Techniques
There is a saying to the effect that it’s much easier to scramble an egg than to unscramble one. The process of finding the derivative of a function (that is, its instantaneous rate of change) is always the same. However, the same cannot be said for finding the integral of a function (that is, “unscrambling” its derivative in order to determine what the function is). In this part of our course, we introduce some special techniques for doing this.

Part VII: Infinite Series
Sometimes we must work with sums that have an infinite number of terms; such a sum is referred to as an infinite series. This might happen, for example, when we are computing the exact area of a non-rectilinear region (e.g, a circle). As far back as in the times of ancient Greece, mathematicians were finding the area of circles by inscribing and circumscribing polygons. They found that, if a square was inscribed in a circle and another square circumscribed about the circle, the area of the circle had to be between the areas of the two squares. As the number of sides of the inscribed and circumscribed polygons were increased, the approximations for the area of the circle became more and more exact. However, no matter how many sides the polygons had, the approximation would never be exact. The process for obtaining the exact area from the approximations is what gave rise to the study of sums that had an infinite number of terms. These types of sums require tools from mathematical analysis in order for us to understand and work with them. 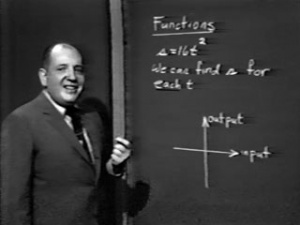 yerffoegnoryk wrote 10 years ago.
For x = 2 in the final got
0 = 0. Where is the
misinterpretation?

Posting Comment...
Disclaimer:
CosmoLearning is promoting these materials solely for nonprofit educational purposes, and to recognize contributions made by Massachusetts Institute of Technology (MIT) to online education. We do not host or upload any copyrighted materials, including videos hosted on video websites like YouTube*, unless with explicit permission from the author(s). All intellectual property rights are reserved to MIT and involved parties. CosmoLearning is not endorsed by MIT, and we are not affiliated with them, unless otherwise specified. Any questions, claims or concerns regarding this content should be directed to their creator(s).

*If any embedded videos constitute copyright infringement, we strictly recommend contacting the website hosts directly to have such videos taken down. In such an event, these videos will no longer be playable on CosmoLearning or other websites.
CosmoLearning ›
Subject: Mathematics
Courses
Calculus Revisited: Single Variable Calculus