Posted on August 8th, 2008 by Kori Ellis on http://botw.org/buzz/computers/defcon-conference/

It is not uncommon for people with similar interests to come together and celebrate their shared hobby. That is why auto clubs, sewing circles, Tupperware parties, fraternities, and all other kinds of groups exist. Hackers are people too, and the pinnacle of hackers congregating to enjoy each other’s company and discuss their common interest is the DEFCON Conference in Las Vegas Nevada.

Whether they are holding a virtual capture the flag competition or staging a hectic coffee war, participants at DEFCON all share an interest in the controversial art of computer hacking. A hacker is someone who is knowledgeable about computer security and skilled in either preventing security breaches or exploiting computer security to gain unauthorized access. Therefore, a convention of said hackers may be seen as controversial and certain planned events at the 2008 DEFCON Conference are already stirring people up.

Hacking has existed since the creation of the very first electronic computers in the early 1970s, and since then the practice has evolved into something that affects millions every day. Such security breaches in the 1970s involved “phreakers”, a portmanteau of “phone” and “freak”, people who were able to break into telephone lines and steal information from the telephone company and from strangers by listening in on their phone calls. In the 1980s, computer hacking became more prevalent, with groups ranging from professional hackers to teenagers managing to break into computer systems, several cases reaching national attention. In 1986, after several years of increased awareness on the security risks that nefarious hackers pose, Congress passed the Computer Fraud and Abuse Act, which made it illegal to break into computer systems. Regardless of this, criminal hacking continued to increase exponentially, with many security breaches across the world creating panic throughout companies, organizations, and even entire countries. The turn of the millennium saw viruses and worms, such as the ILOVEYOU worm, spread throughout the entire world, inflicting billions of dollars worth of damage.

In light of all the damage that hackers have caused, it is not difficult to see why people would be wary of a convention such as DEFCON. The fact is, though, that DEFCON is not a group of malicious hackers getting together to plot the destruction of the global infrastructure. Rather, it is a group of people from all different backgrounds getting together to enjoy each other’s company and their shared interest in computer code, computer architecture, and computer security. Needless to say, computers are an important part of the proceedings at DEFCON, but there are also tons of other events planned as well. In keeping with the spirit of the city in which it is held, Las Vegas, Nevada, DEFCON encourages you to kick back and have fun. If you feel like you would fit in with a group of people that, whether they admit to it or not, are much attuned to their computers, then DEFCON is worth a visit. Registration for DEFCON begins on August 7 at Pre-Con. There, you can visit the Official DEFCON store and register early in order to beat the lines. The cost is $120 dollars in cash only. You can also enjoy the Unofficial DEFCON 16 Toxic BBQ.

Although Pre-Con has its perks, the real event begins on August 8. You can register from 8:00AM to 10:00PM, so if you were not able to register during Pre-Con, there is still hope. From 10:00AM to midnight, there are tons of things to do, split into five tracks. You can take part in any of the events, so it is only a matter of trying to fit everything that you wish to do into one day. You could participate in a presentation on Time-Based Blind SQL Injections Using Heavy Queries given by Chema Alonso and Jose Parada from 10:00AM to 10:50AM and then make your way to the Warballooning Demo at 11:00AM. Although it might not make much sense to you what either of those events are, part of the fun is participating in things that may be out of your realm of thought in order to try something new. Regardless of what you choose, there is probably something for everybody throughout Day 1 of DEFCON. Day 2 is another action-packed day, and you are still able to register if you were unable to get to Las Vegas for Pre-Con or Day 1. You can show off your Guitar Hero 3 skills by taking part in the competition or you can flex your noggin by participating in Hacker Jeopardy. Navigate to www.defcon.org and click on the “Schedule” link in order to plan out a tentative route that will hit all the things that you want to see. At the end of Day 3, there is an award ceremony, so you may just walk away from DEFCON a more accomplished person.

DEFCON is a place to hone your competitive spirit, and you can do so in any of a variety of ways. For example, you could take part in the DEFCON Badge Hacking competition and create a convention badge that defies the laws of paper and plastic badges that other conventions may sport. You could also create a device that will dominate the Beverage Cooling Contraption contest, in which you attempt to quickly cool a beverage in the Nevada heat, competing against people whose designs may or may have not been honed in the previous years of the contest. One of the more controversial contests in the event is the Race to Zero, where hackers will attempt to create a piece of malware that will evade detection by all of the antivirus programs in each round of competition. Because of the nature of the competition, which could potentially produce an undetectable virus, and because of the fact that it promotes the creations of computer viruses in general, it has attracted plenty of controversy. Whether or not you choose to be a part of the Race to Zero at DEFCON, you can certainly enjoy any of the dozens of other events that will be held there.

DEFCON is held at the Riviera Hotel and Casino, located in Las Vegas, Nevada. It will run from the 7th of August to the 10th and people are encouraged to join the thousands of other people that plan to attend the event. Although interest in hacking and computer security is not exactly a cornerstone of traditional American culture, the appreciation of such endeavors should be cultivated well in advance before one plans to attend the event. Although it seems that laptop computers would be a requisite part of the whole affair, casual participants in DEFCON are encouraged to either leave them at home or locked up in the room because of the fact that the wireless network at the hotel will be filled with experts on breaching security. It is not a hospitable atmosphere for a computer with low security standards.

Regardless of whether you plan to compete or just enjoy the ambiance of DEFCON, you are encouraged to attend and see what all the fuss is about. It may be a chance for you to meet face to face with a hacker or it may be a life-changing event where you meet your future best friends, but whatever the case, it will always be DEFCON. 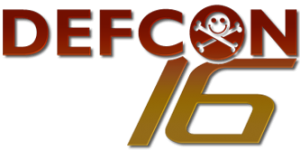 houssien wrote 12 years ago.
thanks

Posting Comment...
Disclaimer:
CosmoLearning is promoting these materials solely for nonprofit educational purposes, and to recognize contributions made by DEFCON (DEFCON) to online education. We do not host or upload any copyrighted materials, including videos hosted on video websites like YouTube*, unless with explicit permission from the author(s). All intellectual property rights are reserved to DEFCON and involved parties. CosmoLearning is not endorsed by DEFCON, and we are not affiliated with them, unless otherwise specified. Any questions, claims or concerns regarding this content should be directed to their creator(s).

*If any embedded videos constitute copyright infringement, we strictly recommend contacting the website hosts directly to have such videos taken down. In such an event, these videos will no longer be playable on CosmoLearning or other websites.
CosmoLearning ›
Subject: Computer Science
Courses
DEFCON 16 (8-10, 2008 - Las Vegas)