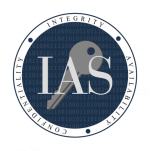 Donate to Institute for Advanced Study

Three-dimensional pure quantum gravity, with the Einstein-Hilbert action has been studied from many points of view, but its status is fundamentally unclear. I will be making a highly tentative effort to reconsider it. (thanks to J. Maldacena)

The first observation that we might make about this theory is that even though on dimensional grounds it appears to be unrenormalizable by power counting, it is actually finite in perturbation theory –modulo a field redefinition and a renormalization of the cosmological constant.

This is so for the same reason that the theory is “trivial.”In 2+1 dimensions, the Riemann tensor Rijkl can be expressed in terms of the Ricci tensor Rij which in turn, using Einstein’s equations, can be expressed as a multiple of the metric tensor gij. So finally, on shell, the only possible counter-term is the volume of spacetime, that is, a renormalization of the cosmological constant.


What I have just said is valid regardless of how one formulates perturbation theory, but actually, there is a natural formulation in which no renormalization or field redefinition is needed.This comes from the fact that classically, 2+1-dimensional gravity can be expressed in terms of gauge theory. The spin connection w is an SO(2,1)gauge field. w can be combined with the “vierbein” e to make a gauge field of gauge group SO(2,2) if the cosmological constant is negative (and a similar group otherwise). We just combine w and e into a 4 x 4 matrix

As long as the vierbeinis invertible, the usual transformations under local Lorentz transformations and diffeomorphisms combine together as gauge transformations of A. This statement actually has an analog in any dimension. What is special in 2+1 dimensions is that the Einstein-Hilbert action can be expressed in a gauge-invariant form

as a Chern-Simons interaction.(Achucarroand Townsend 1987, EW 1988)

From this point of view, perturbation theory is renormalizableby power counting, and is actually finite, since there are no possible local counterterms(and the cosmological constant is a structure constant of the gauge group).

But nonperturbativelythere is a real question, as in gauge theory we will have to allow a non-invertible vierbein.

My own view in 1988 was that the gauge theory description was correct nonperturbatively, and one had to allow a degenerate vierbeinto make sense of the quantum theory.

This view was criticized fairly convincingly, especially by N. Seiberg, who argued that in 0+1 and 1+1 dimensions, where we do know how to make sense of quantum gravity, we take seriously the invertibilityof the vierbeinat the quantum level.

There is, however, another problem with the idea “gauge theory=gravity in 2+1 dimensions”that seems even more acute.

A few years after the gauge theory interpretation of 2+1-dimensional gravity was proposed, it was appreciated that for the case of negative cosmological constant, there is a black hole in this “trivial”theory (Banados, Teitelboim, Zanelli, 1992) and developments in the AdS/CFT correspondence (beginning with Strominger1997) made it clear within a few years that this should be taken seriously.

The BTZ black hole has a horizon of positive circumference and a corresponding Bekenstein-Hawking entropy. If, therefore, pure 2+1-dimensional gravity does correspond to a quantum theory, this theory ought to have a huge degeneracy of black hole states --which we are not going to be able to get in a reasonable way from topological field theory (though some attempts have been made).

Before going on, let us discuss what we are going to aim for in trying to solve 2+1-dimensional gravity. First of all, I am only going to consider the case of negative cosmological constant. Currently there is some suspicion that quantum gravity with ^ >0 doesn’t exist nonperturbatively(in any dimension) with positive cosmological constant. One reason for this is that it does not appear to be possible, with ^>0, to define precise observables. This is natural if it is the case that a world with positive cosmological constant (like the one we may be living in) is always unstable.If that is so, then a world with ^>0 doesn’t really make sense as an exact theory in its own right but (like an unstable particle) must be studied as part of a larger system.

Whether that is the right interpretation or not, since I do not know how to define any precise observables, I don’t know what it would mean to try to solve 2+1-dimensional gravity with ^>0, since it isn’t clear what we’d want to compute.

With zero cosmological constant, above 2+1 dimensions, there is a meaningful observable: the S-matrix.

In 2+1 dimensions without matter fields, we have no local propagating fields, and also no black holes if the cosmological constant is zero. So there is no S-matrix, and again, there is no clear picture of what one wants to calculate in trying to solve the theory.

With negative cosmological constant, there is an analog of the S-matrix, namely the dual conformal field theory. It captures the asymptotic information that is analogous to the S-matrix ^>0 in the case. Not only does this make sense in 2+1 dimensions, but in fact one of the precursors of the AdS/CFT correspondence was the work of Brown and Henneaux(1986) on 2+1-dimensional gravity.

Brown and Henneauxshowed that the Hilbert space of 2+1-dimensional gravity, with --the ellipses refer to the fact that this result isn’t affected by matter fields –has an action of a left-and right-moving pair of Virasoro algebras with cL = cR = 3l / 2G. In our modern understanding, this is part of a much richer structure –the dual CFT

What it means to solve quantum gravity with ^>0 is to find the dual CFT. And to repeat, we focus on the case ^>0 because that is the only case in which we know what it would mean to solve the theory. 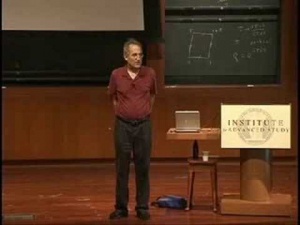 mobeen wrote 11 years ago.
these lectures and online website is amazing.

*If any embedded videos constitute copyright infringement, we strictly recommend contacting the website hosts directly to have such videos taken down. In such an event, these videos will no longer be playable on CosmoLearning or other websites.
CosmoLearning ›
Subject: Physics
Courses
Edward Witten Lecture: 2+1-Dimensional Gravity Revisited