Theory of Relativity for Dummies: Explained in 7 Minutes 1 lectures | 2,193 views

This course will develop and apply Einstein's General Theory of Relativity. One of the most interesting aspects of this subject is that it brings the student to our modern understanding of the earliest recognized of the fundamental forces of nature, i.e. gravitation. The student sees this first as a source of constant acceleration near the surface of the Earth (projectile motion), and then matures their understanding, with Newton's Universal Law of Gravitation, to a notion of gravitation as a central force acting between any two bodies with nozero mass. While the Newtonian view works in many applications, it fails when contemplating systems that are ginormously massive. The (more) correct theory, General Relativity, is not a simple "extension" of Newtonian gravity, but rather a complete revision of our understanding of gravity. In some cases, e.g planetary orbits, the predictions of General Relativity provide small corrections to the "for the most part correct" results of the Newtonian theory. However in other circumstances, e.g. black holes and cosmology, General Relativity gives us results that quite honestly would have sent Newton running scared and have left many other physicists scratching their heads in disbelief!

This subject is often tauted as too mathematically sophisticated for undergraduates, which I find to be a shame since the concepts underlying the theory can be expressed concisely and clearly given a reasonable effort on the part of the instructor. While the subject does involve mathematics that extend beyond what has already been encountered in most other physics courses, the truth of the matter is that it really boils down to taking what you already know and being as general as possible with it. When you leave this course, you will know far better what a "vector" is than many professional physicists. There is a wealth of material that we can study and the extent of what we do will rely in part on your diligence to the course. 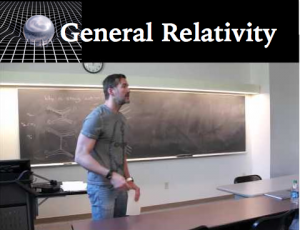 There are no comments. Be the first to post one.
Posting Comment...
Disclaimer:
CosmoLearning is promoting these materials solely for nonprofit educational purposes, and to recognize contributions made by Colorado School of Mines (CSM) to online education. We do not host or upload any copyrighted materials, including videos hosted on video websites like YouTube*, unless with explicit permission from the author(s). All intellectual property rights are reserved to CSM and involved parties. CosmoLearning is not endorsed by CSM, and we are not affiliated with them, unless otherwise specified. Any questions, claims or concerns regarding this content should be directed to their creator(s).

*If any embedded videos constitute copyright infringement, we strictly recommend contacting the website hosts directly to have such videos taken down. In such an event, these videos will no longer be playable on CosmoLearning or other websites.
CosmoLearning ›
Subject: Physics
Courses
General Relativity Video Lectures, Notes, and Exercises