The idea for these Lectures on Continuum Physics grew out of a short series of talks on materials physics at University of Michigan, in the summer of 2013. Those talks were aimed at advanced graduate students, post-doctoral scholars, and faculty colleagues. From this group the suggestion emerged that a somewhat complete set of lectures on continuum aspects of materials physics would be useful. The lectures that you are about to dive into were recorded over a six-week period at the University. Given their origin, they are meant to be early steps on a path of research in continuum physics for the entrant to this area, and I daresay a second opinion for the more seasoned exponent of the science. The potential use of this series as an enabler of more widespread research in continuum physics is as compelling a motivation for me to record and offer it, as is its potential as an open online class.

This first edition of the lectures appears as a collection of around 130 segments (I confess, I have estimated, but not counted) of between 12 and 30 minutes each. The recommended single dose of online instruction is around 15 minutes. This is a recommendation that I have flouted with impunity, hiding behind the need to tell a detailed and coherent story in each segment. Still, I have been convinced to split a number of the originally longer segments. This is the explanation for the proliferation of Parts I, II and sometimes even III, with the same title. Sprinkled among the lecture segments are responses to questions that arose from a small audience of students and post-doctoral scholars who followed the recordings live. There also are assignments and tests.

The roughly 130 segments have been organized into 13 units, each of which may be a chapter in a book. The first 10 units are standard fare from the continuum mechanics courses I have taught at University of Michigan over the last 14 years. As is my preference, I have placed equal emphasis on solids and fluids, insisting that one cannot fully appreciate the mechanical state of one of these forms of matter without an equal appreciation of the other. At my pace of classroom teaching, this stretch of the subject would take me in the neighborhood of 25 lectures of 80 minutes each. At the end of the tenth of these units, I have attempted, perhaps clumsily, to draw a line by offering a roadmap of what the viewer could hope to do with what she would have learned up to that point. It is there that I acknowledge the modern masters of continuum mechanics by listing the books that, to paraphrase Abraham Lincoln, will enlighten the reader far above my poor power to add or detract.

At this point the proceedings also depart from the script of continuum mechanics, and become qualified for the mantle of Continuum Physics. The next three units are on thermomechanics, variational principles and mass transport--subjects that I have learned from working in these areas, and have been unable to incorporate in regular classes for a sheer want of time. In the months and years to come, new editions of these Lectures on Continuum Physics will feature an enhancement of breadth and depth of these three topics, as well as topics in addition to them.

Finally, a word on the treatment of the subject: it is mathematical. I know of no other way to do continuum physics. While being rigorous (I hope) it is, however, neither abstract nor formal. In every segment I have taken pains to make connections with the physics of the subject. Props, simple but instructive, have been used throughout. A deformable plastic bottle, water and food color have been used--effectively, I trust. The makers of Lego, I believe, will find reason to be pleased. Finally, the time-honored continuum potato has been supplanted by an icon of American life: the continuum football.

This Work, Lectures on Continuum Physics, by Krishna Garikipati is licensed under a Creative Commons Attribution-NonCommercial license. 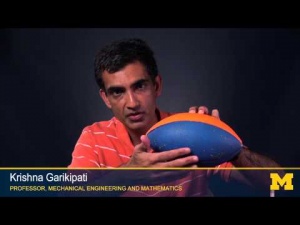 Posting Comment...
Disclaimer:
CosmoLearning is promoting these materials solely for nonprofit educational purposes, and to recognize contributions made by University of Michigan (U. Michigan) to online education. We do not host or upload any copyrighted materials, including videos hosted on video websites like YouTube*, unless with explicit permission from the author(s). All intellectual property rights are reserved to U. Michigan and involved parties. CosmoLearning is not endorsed by U. Michigan, and we are not affiliated with them, unless otherwise specified. Any questions, claims or concerns regarding this content should be directed to their creator(s).

*If any embedded videos constitute copyright infringement, we strictly recommend contacting the website hosts directly to have such videos taken down. In such an event, these videos will no longer be playable on CosmoLearning or other websites.
CosmoLearning ›
Subject: Physics
Courses
Lectures on Continuum Physics