In this course, UMKC's Professor Richard Delaware gives 45 video lectures on Calculus, in association with UMKC's Video Based Supplemental Instruction Program. Topics covered in this course are:

Links:
- Listing of the Calculus I Videos and Their Contents

Brief History of this Video Course
- In 2005, Richard Delaware spent 8 months recording a Calculus I course on video for the VSI (Video-based Supplemental Instruction) program at UMKC. "Supplemental Instruction" in this sense does not indicate a remedial course, and no content or conceptual richness has been sacrificed. College Algebra was the first mathematics VSI course to be recorded, but the VSI concept which has been in place at UMKC since 1992 has attracted national attention because of its success in 3 other video courses taken by students at UMKC and at 30 other institutions in Missouri.

- Although video technology is commonplace, the pedagogy is fresh. Students view the tapes in the presence of a trained facilitator, and have control over the flow of information; lectures are stopped, started, and replayed as needed. When the facilitator pushes the stop button, as cued on the video, students have time to work problems, ask questions, make observations, resolve confusions, collect their thoughts, and more.

- The course was recorded in a UMKC video studio by the Multimedia Technology Services division of Instructional Technologies. 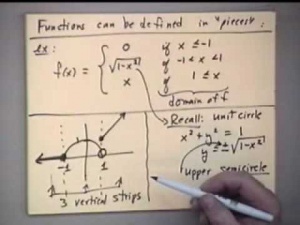 UMKC's Professor Richard Delaware in Lecture 1: A Review of Precalculus.
16 ratings
16 ratings
No

Matt Smith wrote 9 years ago.
These videos have been posted on YouTube by UMKC (The Uni of
Missouri at Kansas City)

richy wrote 10 years ago.
this guy is a genuis, even if u have no pre knowledge u can
understand everything

Syd Dogonniuck wrote 11 years ago.
The last example you did with the absolute value was very
helpful, thank you!

idiado esosa wrote 11 years ago.
how do i get your calculus lecture on a cd

ZRROBHERTTS L-OWWUSU-GYAW wrote 11 years ago.
Hi I have enjoyed the lectures very much. What a great
lecturer. I was wondering, where can I get calculus 2
lectures - if there is?

chandan kumar wrote 12 years ago.
This is a very good video and one can learn a lot from by
watching and observing this .BUT THIS IS VERY UNFORUTNET
THAT ONE CAN NOT DOWNLOAD THIS VIDEOS BECAUSE THE LINK WHICH
IS PROVIDED BY THIS SITE IS VERY BAD AND DOES NOT PROVIDES
ANY GOOD PLATEFORM ATALL.

menna wrote 12 years ago.
what do i do when it says>>the video is not available
right now???

blank frank wrote 12 years ago.
This is great! Thank you! The lectures that are unavailable
can be found at the end of the previous lecture. ie, lecture
5 is included with lecture 4. This has been a wonderful
supplement to my Calculus class. However, Professor Delaware
wastes A LOT of paper! Get this guy a smart board, please.

Posting Comment...
Disclaimer:
CosmoLearning is promoting these materials solely for nonprofit educational purposes, and to recognize contributions made by University of Missouri-Kansas City (UMKC) to online education. We do not host or upload any copyrighted materials, including videos hosted on video websites like YouTube*, unless with explicit permission from the author(s). All intellectual property rights are reserved to UMKC and involved parties. CosmoLearning is not endorsed by UMKC, and we are not affiliated with them, unless otherwise specified. Any questions, claims or concerns regarding this content should be directed to their creator(s).

*If any embedded videos constitute copyright infringement, we strictly recommend contacting the website hosts directly to have such videos taken down. In such an event, these videos will no longer be playable on CosmoLearning or other websites.
CosmoLearning ›
Subject: Mathematics
Courses
Math 210: Calculus I