This course of 25 lectures, filmed at Cornell University in Spring 2014, is intended for newcomers to nonlinear dynamics and chaos. It closely follows Prof. Strogatz's book, "Nonlinear Dynamics and Chaos: With Applications to Physics, Biology, Chemistry, and Engineering."

The mathematical treatment is friendly and informal, but still careful. Analytical methods, concrete examples, and geometric intuition are stressed. The theory is developed systematically, starting with first-order differential equations and their bifurcations, followed by phase plane analysis, limit cycles and their bifurcations, and culminating with the Lorenz equations, chaos, iterated maps, period doubling, renormalization, fractals, and strange attractors.

A unique feature of the course is its emphasis on applications. These include airplane wing vibrations, biological rhythms, insect outbreaks, chemical oscillators, chaotic waterwheels, and even a technique for using chaos to send secret messages. In each case, the scientific background is explained at an elementary level and closely integrated with the mathematical theory. The theoretical work is enlivened by frequent use of computer graphics, simulations, and videotaped demonstrations of nonlinear phenomena.

The essential prerequisite is single-variable calculus, including curve sketching, Taylor series, and separable differential equations. In a few places, multivariable calculus (partial derivatives, Jacobian matrix, divergence theorem) and linear algebra (eigenvalues and eigenvectors) are used. Fourier analysis is not assumed, and is developed where needed. Introductory physics is used throughout. Other scientific prerequisites would depend on the applications considered, but in all cases, a first course should be adequate preparation. 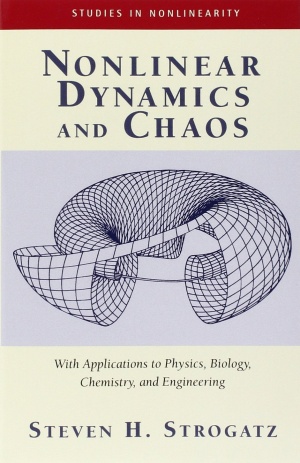 There are no comments. Be the first to post one.
Posting Comment...
Disclaimer:
CosmoLearning is promoting these materials solely for nonprofit educational purposes, and to recognize contributions made by Cornell University (Cornell) to online education. We do not host or upload any copyrighted materials, including videos hosted on video websites like YouTube*, unless with explicit permission from the author(s). All intellectual property rights are reserved to Cornell and involved parties. CosmoLearning is not endorsed by Cornell, and we are not affiliated with them, unless otherwise specified. Any questions, claims or concerns regarding this content should be directed to their creator(s).

*If any embedded videos constitute copyright infringement, we strictly recommend contacting the website hosts directly to have such videos taken down. In such an event, these videos will no longer be playable on CosmoLearning or other websites.
CosmoLearning ›
Subject: Mathematics
Courses
Nonlinear Dynamics and Chaos with Steven Strogatz