Introduction to the Physics of Remote Sensing 0 lectures | 1,354 views

This is a complete advanced graduate-level physics course delivered by Fernando Quevedo at Cambridge University on the science and mathematics of supersymmetry (SUSY) and extra dimensions. Unfortunately, lecture 14 has no audio, and lecture 23 only has partial audio. These lectures are accompanied by a full set of notes found under the “Read Textbook” button.

Based on the lecture notes, the title of each lecture was named as close to the notes as possible. 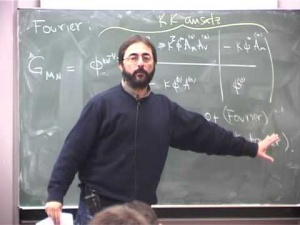 There are no comments. Be the first to post one.
Posting Comment...
Disclaimer:
CosmoLearning is promoting these materials solely for nonprofit educational purposes, and to recognize contributions made by University of Cambridge (Cambridge) to online education. We do not host or upload any copyrighted materials, including videos hosted on video websites like YouTube*, unless with explicit permission from the author(s). All intellectual property rights are reserved to Cambridge and involved parties. CosmoLearning is not endorsed by Cambridge, and we are not affiliated with them, unless otherwise specified. Any questions, claims or concerns regarding this content should be directed to their creator(s).

*If any embedded videos constitute copyright infringement, we strictly recommend contacting the website hosts directly to have such videos taken down. In such an event, these videos will no longer be playable on CosmoLearning or other websites.
CosmoLearning ›
Subject: Physics
Courses
Supersymmetry and Extra Dimensions