Literature and World of the Hebrew Bible 37 lectures | 34,555 views

Historical and Chronological Context of the Bible 37 lectures | 41,284 views

The Catholic Church: Builder of Civilization

The myths that minimize and falsify the influence of Catholicism on Western culture. Contrary to popular opinion, the Catholic Church has been responsible for the vast bulk of what we treasure in Western Civilization. Dr. Thomas Woods Jr. takes you beyond pseudo-historical attempts to minimize the Church's contributions to society, revealing how She has played an integral role in the sciences, the university system, western moral principles, law, economics, and much else besides. Grab your compass and get ready to take a journey through history, you're sure to see the Catholic Church everywhere you turn.

Introduction -  Dr. Thomas Woods Jr. begins his study of the Church’s contributions to the building of Western Civilization by debunking the myths that minimize and falsify the influence of Catholicism on Western culture.

The Church And Science - Exposition of the numerous and amazing contributions the Catholic Church has made to society with a look at how much the scientific world owes to the discoveries of priests and monks.

Priests As Scientific Pioneers - contributions to the building of Western Civilization with a look at the priests who were leading pioneers in astronomy, geology, and other sciences.

The Galileo Files - Contributions to the building of Western Civilization with an in-depth look at what really happened in the Galileo case.

The University System - Contributions to the building of Western Civilization with a look at the Church’s long time role as protector and facilitator of knowledge and learning.

Does God Exist? - Examination of some of the arguments Church scholars have made for the existence of God.

The Monks - A look at the importance of monks as the protectors of learning and knowledge during the barbarian invasions and the Middle Ages.

Catholic Charity - A look at the numerous acts of dynamic and selfless charity practiced by Catholics throughout the ages.

Western Morality - How western standards of morality have been decisively shaped by the Catholic Church.

Concepts Of Rights And Law - how modern western legal systems are a kind of secular residue of Catholicism's vision of law.

The Anti-Catholic Atrocities That History Forgot - Numerous situations in which Catholics have been persecuted for their faith.

Wrap -Up - Review of all the areas in which the Church affected culture and society. 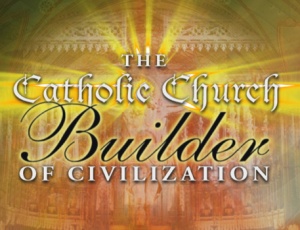 There are no comments. Be the first to post one.
Posting Comment...
Disclaimer:
CosmoLearning is promoting these materials solely for nonprofit educational purposes, and to recognize contributions made by EWTN (EWTN) to online education. We do not host or upload any copyrighted materials, including videos hosted on video websites like YouTube*, unless with explicit permission from the author(s). All intellectual property rights are reserved to EWTN and involved parties. CosmoLearning is not endorsed by EWTN, and we are not affiliated with them, unless otherwise specified. Any questions, claims or concerns regarding this content should be directed to their creator(s).

*If any embedded videos constitute copyright infringement, we strictly recommend contacting the website hosts directly to have such videos taken down. In such an event, these videos will no longer be playable on CosmoLearning or other websites.
CosmoLearning ›
Subject: Religious Studies
Courses
The Catholic Church: Builder of Civilization