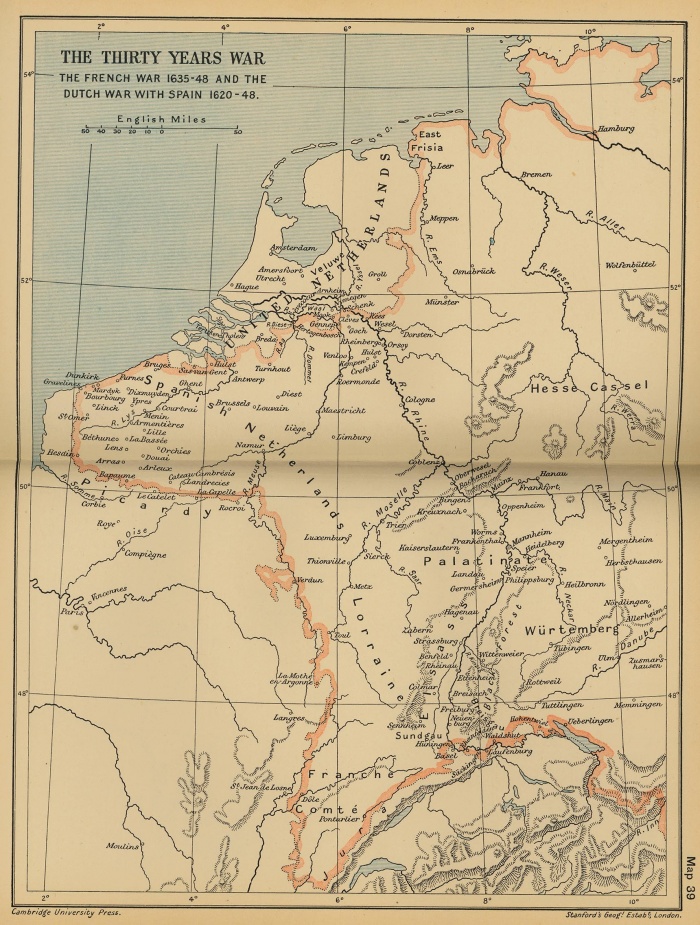 Displaying image 63 of 467 images in History.

"THE LAST PHASE OF THE WAR AND THE ROAD TO SETTLEMENT

"France was now faced by the prospect of a Spanish offensive supported by the emperor’s army against the garrisons it had placed beyond its frontiers, in Lorraine, Alsace, and along the upper Rhine and Moselle rivers in the preceding years. In answer to an attack on the prince-bishop of Trier, who had become a French ally and client in 1632, Louis XIII declared war on Spain in May 1635. With the emperor’s own declaration of war on France in March 1636, the war in Germany had, it seemed, finally fused with the all-European conflict between Spain and its enemies, which had already decisively influenced events in the empire in the past. Whereas French financial subsidies helped Sweden gradually recover from the defeat of Nordlingen, Spanish resources became increasingly inadequate to finance the worldwide war effort of the monarchy in the early 1640s. Spain suffered important naval defeats against the Dutch off the English coast in 1639 (Battle of the Downs) and near Recife in Brazil in 1640. Moreover, in 1640 both Catalonia and Portugal revolted against Castilian rule in an attempt to shake off the fiscal and political burden imposed on them by warfare. Spain did not recognize Portugal’s independence until 1668 and managed to reconquer Catalonia in the 1650s. Nevertheless, it was no longer able to launch major offensive operations in central Europe. Emperor Ferdinand III (ruled 1637–1657), reluctantly supported by the majority of the German princes, was now virtually on his own in his fight against both France (which had committed a major army to operations in southern Germany) and Sweden. Nevertheless, the war dragged on for another eight years.

"The logistics of warfare in a country that had been utterly devastated by continuous fighting and lacked the most essential provisions proved a major obstacle to large-scale offensive operations. For this reason, victories won in battles could rarely be fully exploited. Moreover, a war between Denmark and Sweden (1643–1645) gave the emperor’s army time to recover after the devastating defeat it had suffered in the second battle of Breitenfeld in November 1642. However, in March 1645 the Swedes beat the imperial army decisively at Jankov in Bohemia. Although Ferdinand III was able to buy off Sweden’s ally Transylvania, which had once more, as in the 1620s, intervened in the war (supported halfheartedly by the sultan), by territorial and religious concessions in Hungary, he was now forced to come to terms with his opponents. His allies in Germany became increasingly restless and either withdrew from active participation in warfare altogether or insisted on ending the war. Reluctantly the emperor entered into negotiations with Sweden in Osnabruck and with France in neighboring Munster in autumn 1645. Against his wishes, the German princes and Estates were allowed to participate in the peace conference, sending their own envoys to Westphalia. Partly because Ferdinand hesitated to abandon his old ally Spain, it was nevertheless three years before a settlement was reached.

"Peace between France and Spain proved elusive. So when the peace treaties were signed at Munster and Osnabruck on 24 October 1648, the Franco-Spanish conflict was deliberately excluded from the settlement. The treaties, known as the Peace of Westphalia, therefore failed to provide the basis for a truly European peace. The complicated legal arrangements that dealt with the various constitutional and religious problems of the Holy Roman Empire, on the other hand, proved remarkably long-lasting and stable, being invoked right up to the end of the empire in 1806."