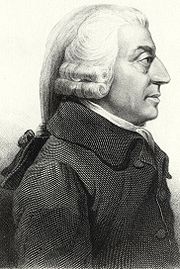 Displaying image 13 of 25 images in Economics.

Adam Smith (1723-1790) is popularly seen as the father of modern political economy. His publication of the An Inquiry Into the Nature and Causes of the Wealth of Nations in 1776 happened to coincide not only with the American Revolution, shortly before the Europe wide upheavals of the French Revolution, but also the dawn of a new industrial revolution that allowed more wealth to be created on a larger scale than ever before. Smith was a Scottish moral philosopher, whose first break was The Theory of Moral Sentiments (1759). He argued in this that people's ethical systems develop through personal relations with other individuals, that right and wrong are sensed through others' reactions to one's behaviour. This gained Smith more popularity than his next work, The Wealth of Nations, which the general public initially ignored.[25] Yet Smith's political economic magnum opus was successful in circles that mattered. In The Wealth of Nations Smith makes a case that the free market, while appearing chaotic and unrestrained, is actually guided to produce the right amount and variety of goods by an "invisible hand". Smith argued for a "system of natural liberty" where individual effort was the producer of social good. Smith believed that when an individual pursues his self-interest, he promotes the good of society more than so if he intends to benefit society. Self-interested competition in the free market, he argued, would tend to benefit society as a whole by keeping prices low, while still building in an incentive for a wide variety of goods and services.

An often-quoted passage from The Wealth of Nations is:

It is not from the benevolence of the butcher, the brewer, or the baker that we expect our dinner, but from their regard to their own self-interest. We address ourselves, not to their humanity but to their self-love, and never talk to them of our own necessities but of their advantages.

Smith believed that the division of labour was the driver of economic efficiency.