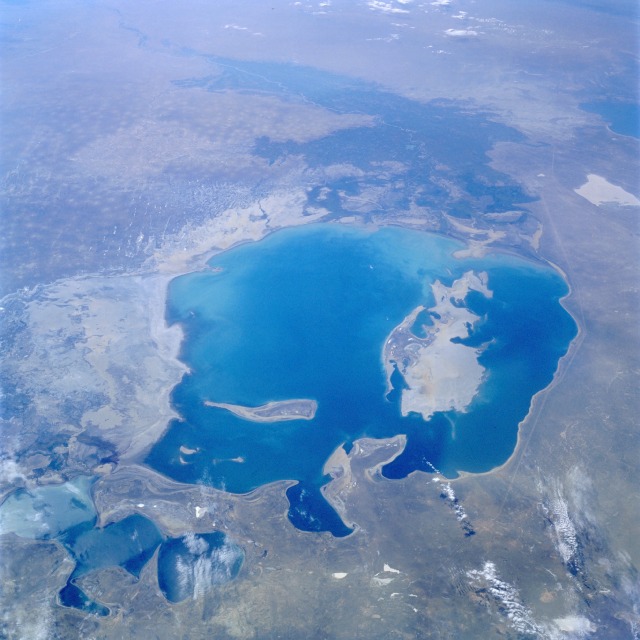 Displaying image 65 of 70 images in Geography.

Not yet rated
Not yet rated
No
STS047-079-083 Aral Sea, Kazakhstan and Uzbekistan September 1992
A much depleted Aral Sea (refer to the July 1985 photograph STS-51F-036-0059) can be seen in this south-looking, low-oblique view. The emerging, pointed island of Barsa-Kel’mes and the expanding, broad Vozrozhdeniya Island are visible in the center of the sea. Vozrozhdeniya Island is expanding southward toward the Amu Darya River Delta and northward toward the growing Kulandy Peninsula. Continued shrinkage of the Aral Sea water levels will eventually cut off the western portion from the rest of the sea. This phenomenon has already occurred in the extreme northern portion of the sea. Because of dropping water levels, the Karatyup Peninsula (the stretch of land visible north of the main portion of the Aral Sea) has expanded eastward and connected with the delta of the Syr Darya River, cutting off the extreme northern portion from the larger main area of the Aral Sea. With no river inlet into this extreme north portion, it is only a matter of time before this area is reduced to a series of smaller lakes. East of the sea, more exposed shoreline is visible (whitish-gray). It is estimated that the Aral Sea water level has decreased 46 percent since 1960 and is continuing to decrease. The darker areas to the south are the irrigated agricultural lands of the Amu Darya River.
Views: 2,098
Added: 11 years ago.
Topic: Physical Geography