Image: Astronomy Picture of the Day: The Magellanic Stream 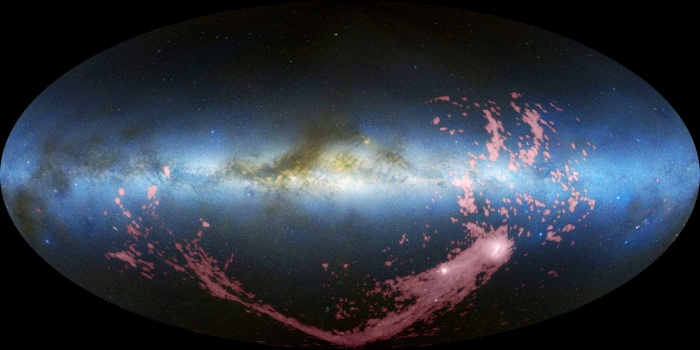 Displaying image 266 of 363 images in Astronomy.

Explanation: Spanning the sky toward the majestic Clouds of Magellan is an unusual stream of gas: the Magellanic Stream. The origin of this gas remains unknown but likely holds a clue to the origin and fate of our Milky Way's most famous satellite galaxies: the LMC and the SMC. Until recently, two leading genesis hypotheses have been considered: that the stream was created by gas stripped off these galaxies as they passed through the halo of our Milky Way, or that the stream was created by the differential gravitational tug of the Milky Way. Recently, however, wide angle radio images -- including those from the Byrd Green Bank Telescope -- have shown that the Magellanic Stream is longer and older than previously thought, perhaps as old as 2.5 billion years. These observations bolster a third possible origin for the stream -- that the Large and Small Magellanic Cloud galaxies once passed so close to each other that gravitational tides triggered a burst of star formation that left the stream. Pictured above digitally superposed on a recently-completed all-sky image in visible light, the radio emission of Magellanic stream is shown in false color pink extending across the sky and ending at the two Magellanic galaxies on the lower right.