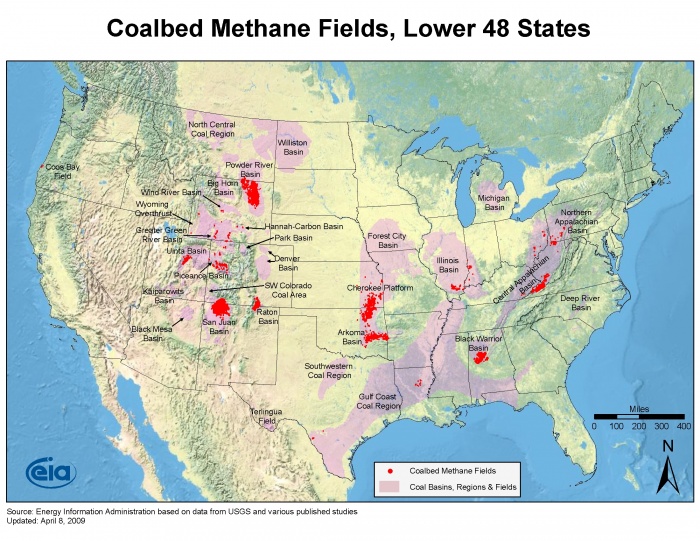 Displaying image 2 of 2 images in Engineering.

Recoverable resource estimates of coalbed natural gas are those volumes

which are potentially recoverable under existing and foreseen technological

conditions. They have not yet been discovered or developed, and do not include


These Coalbed Methane (CBM) resource estimates are from Potential Supply of Natural Gas in the United States, Report of the Potential Gas Committee (PGC), 12/31/2006 (www.mines.edu/research/pga/index.html). The committee is comprised of volunteer experts from the gas industry, government, and academia. The displayed volumes are the sums by basin of the estimated most likely (modal) volumes of Probable plus Possible plus Speculative resources. It would be preferable to sum the estimated mean values rather than the estimated modal values, but the former are not provided for CBM. The relative portion of each basin's resource potential within the United States is shown on the pie chart to the left. Note that some of the PGC basins were aggregated to reduce the number of pie slices. Units for the resource estimates are trillion cubic feet (TCF) of CBM gas.

The mature San Juan Basin represents only 5% of the resource total. Alaska (not in the chart) dominates the total resources of CBM with 35%, but note that Alaska is comprised of multiple basins aggregated together whereas most of the Lower 48 States basins are not aggregated. Given their relatively small areas, the Raton, Hanna-Carbon, Pacific, and Wind River basins have a relatively high resource volume.

Source: Energy Information Administration based on data from USGS and various published studies