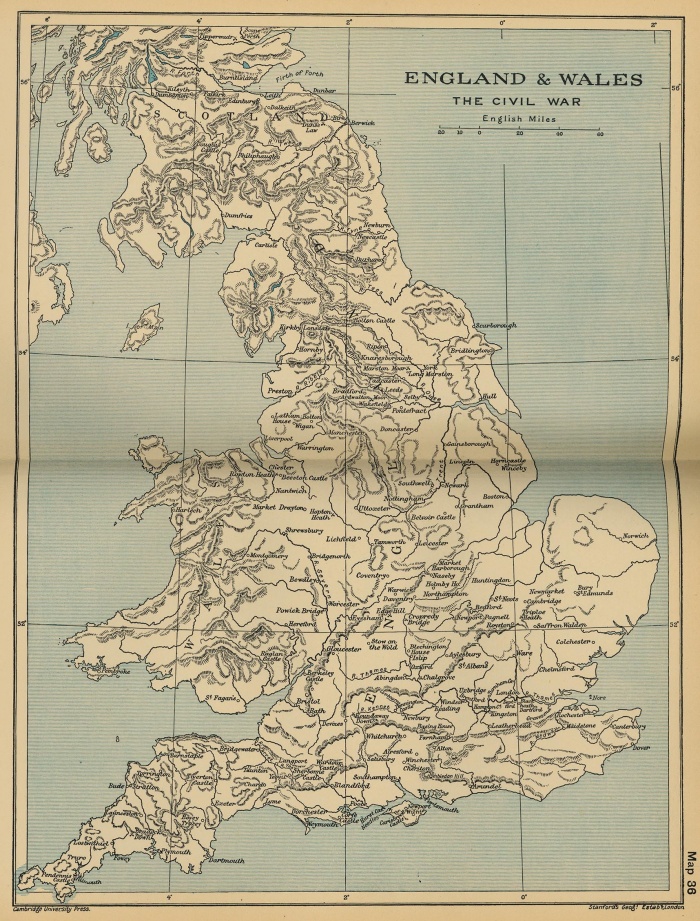 Displaying image 58 of 467 images in History.

“England did not participate in the Thirty Years’ War because the early Stuart monarchs, James I (reigned 1603–25) and Charles I (reigned 1625–49), were caught in a political dilemma from which they could not escape. Like Denmark and Sweden, England was a “domain” state: the regular revenues of the crown came not from taxes, which could be levied only by Parliament, but from the royal domain. This was not necessarily a disadvantage. The Danish monarch held more than 40 percent of the arable land in Denmark and derived vast revenues from the Sound Tolls levied on every ship passing from the North Sea into the Baltic. The Swedish royal estate derived great wealth from export duties on copper and iron, the country’s major exports. Both countries were therefore able to exert a political and military influence wholly disproportionate to their size.

“England had no comparable sources of revenue. The failure of Henry VIII to retain monastic lands taken at the time of the Reformation left the crown without sufficient property to “live of its own.” Even import and export duties, though technically part of the domain, had to be authorized by Parliament. The resulting poverty, already evident under Elizabeth, restricted the crown’s ability to reward its supporters. Worse, it forced her Stuart successors to seek wealth in ways that profoundly offended their subjects. Knights’ fines, ship money, quo warranto proceedings, and the abuse of wardships struck directly at property rights and aroused a firestorm of opposition. Much of this opposition was at first centered in the legal profession where such jurists as Sir Edward Coke (1552–1634) revived the common law as a protection against royal prerogatives, but in the end Parliament proved to be the crown’s most formidable adversary. Between 1540 and 1640 the wealth and numbers of the landholding gentry, the professions, and the merchant community had increased enormously. These elements of the English elite dominated the House of Commons, which took the lead in opposing royal policies. The Stuarts feared their disaffection and would have preferred to rule without calling Parliament. Except for relatively short periods, this was impossible. Even the smallest of crises forced the crown to seek relief through parliamentary taxation. The growing resentment in Parliament might have been better managed had it not been for the personalities of the Stuart kings. Neither James nor Charles was capable of inspiring great loyalty. James was awkward, personally dirty, and a homosexual at a time when homosexuality was universally condemned. His son was arrogant and generally distrusted, while the court as a whole was thought to be morally and financially corrupt. Though James, who annoyed his subjects with treatises on everything from the evils of tobacco to witchcraft, wrote eloquently in support of the divine right of kings, the legitimacy of his family’s rule was continually undermined by his own behavior and by the devious policies of his son. The religious question was more serious. Elizabeth, not wishing “to make windows into men’s souls,” had established a church that was Protestant but relatively tolerant. Some of her subjects had retained a fondness for the ideas and liturgical practices of the old church, while others, known as Puritans, followed Calvin with varying degrees of rigor. James was a Calvinist who commissioned the King James Bible in 1611 and established Protestant colonists in northern Ireland in the same year. He quarreled with the Puritans over church governance and other matters, but he managed to avoid an open breach as they grew more powerful over the course of his reign. Charles, however, supported the anti-Puritan reforms of Archbishop William Laud (1573–1645). Though Laud was no Catholic, Queen Henriette Marie (1609–1669) heard Mass regularly. She was the sister of Louis XIII and a strong personality who exerted great influence over her husband. The Puritans suspected that Charles meant to restore Catholicism. Faith, as well as liberty and property, was thought to be at risk.

Twenty years of increasingly bitter conflict between Parliament and the crown led to civil war in 1642. The Scots rebelled in 1638 when Charles tried to introduce the English Book of Common Prayer at Edinburgh. To pay for the Scottish war, he summoned what is called the Long Parliament because it met from 1640 to 1660. In response to his call for money, the Commons impeached Archbishop Laud and Charles’s chief minister, Thomas Wentworth, earl of Strafford. They then abolished the prerogative courts of Star Chamber and High Commission. When Charles failed to impeach the parliamentary leaders he fled from London, and Parliament decided to raise an army in its own defense. After three years of hard fighting, the royalists were defeated at Naseby (June 14, 1645), but serious divisions had appeared in the parliamentary ranks. The army was now dominated by Independents, who favored a congregational form of church government, while the Parliament they served was controlled by Presbyterians. The Independents refused to disband without guaranteed freedom of conscience and the removal of certain Presbyterians from Parliament. The Scots, fearing a threat to their own Presbyterian church order, were alarmed. Charles sought to capitalize on these strains by abolishing the Scottish episcopate in return for Presbyterian support, but the Scots and their English allies were defeated by the army at Preston (August 17–20, 1548). The victors now felt that compromise was impossible. In December the army captured Charles and purged the Commons of its Presbyterian members. A court appointed by the Rump, as the remnant of Parliament was now called, sentenced the king to death. He was beheaded at Whitehall on January 30, 1649.

For all practical purposes, England was governed by the army. A republican constitution had been established, but real power lay in the hands of Oliver Cromwell (1599–1658), the most successful of the parliamentary generals. In 1653 he was named lord protector of the Commonwealth of England, Scotland, and Ireland. A radical Protestant, Cromwell attempted to reform English society along Puritan lines while following a vigorous policy abroad. After subduing the Scots, he fought a naval war with the Dutch (1552–54) and started another with Spain in 1656. The Irish Catholics, who had massacred thousands of Protestants in 1641, were ruthlessly suppressed. Cromwell had refused to accept the crown when it was offered to him in 1657, but when he died in the following year he left the Protectorate to his son Richard. Richard’s rule was brief and troubled. He was forced to resign after only nine months, and a Convention Parliament restored Charles II (1630–85), son of Charles I, on May 8, 1660. The English had tired of Puritanism and military rule."
Source: Steven Hause and William Maltby, Western Civilization: A History of European Society (Cengage Learning, 2004), chapter 15

The War ended with the Parliamentary victory at the Battle of Worcester on 3 September 1651.