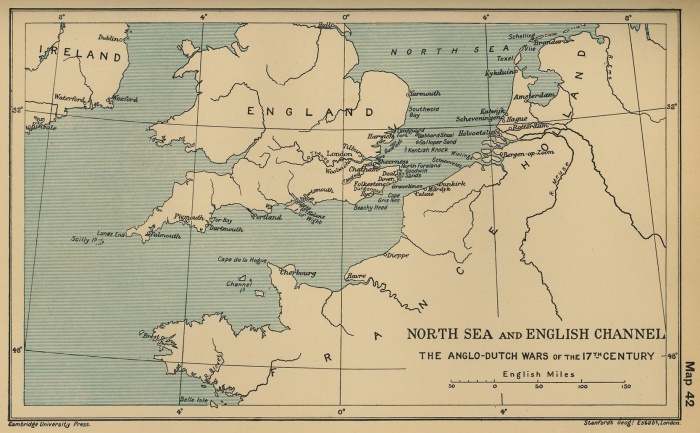 Displaying image 66 of 467 images in History.

North Sea and English Channel: The Anglo-Dutch Wars of the 17th Century

"The wealth that underwrote England’s command of the sea and financed the campaigns of Marlborough on land came from nearly a century of unparalleled economic growth. England’s growing commercial strength was based in part on geographic advantage. Faced with the implacable hostility of Louis XIV, the Dutch were forced to spend much of their wealth defending their borders on land. England, an island, was spared this expense. Moreover, with their deep water ports and location to windward of the continent, the English could disrupt Dutch trade by blocking access via the English Channel. The Anglo-Dutch wars of 1652–53, 1665–66, and 1672–73 were fought over this issue. As George Monk, the English general-at-sea in the Second Dutch War said: “What we want is more of the trade the Dutch now have.” Dutch seamen acquitted themselves well, but the cost of battles in which more than a hundred ships might be engaged on each side, together with the need to provide convoys for trading vessels even in peacetime, gradually eroded their competitive advantage.

"Even favorable geography probably could not have given England a decisive lead had it not been for a system of credit and finance that became the envy of Europe. The revolution of 1688 paved the way for the land tax of 1692 and the extension of excise taxes to a wide range of consumer goods. England acquired the benefits of permanent taxation for the first time in its history. The Bank of England, established in 1694, then stabilized English finances by underwriting government war loans. In the eighteenth century it became the first of Europe’s central banks, allowing private bankers to draw upon its gold reserves in periods of financial crisis. Credit, backed by reliable taxation, paid for the fleet, Marlborough’s armies, and the large subsidies that England paid to its continental allies. England, which became Great Britain when it merged with Scotland in 1707, was therefore able to expand its empire and protect its markets more easily than the Dutch, whose war fleet declined after 1673 and whose decentralized institutions blocked the formation of more effective credit mechanisms. English trade, which had been expanding steadily throughout the seventeenth century, became a flood during the War of the Spanish Succession when the British navy swept the seas of all rivals (see table 16.1). In time the enormous wealth derived largely from overseas markets would provide the capital for the industrial revolution and further strengthen English claims to great power status."
Source: Steven Hause and William Maltby, Western Civilization: A History of European Society (Cengage Learning, 2004), chapter 16