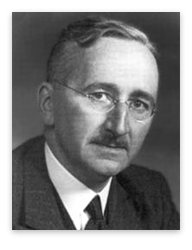 Friedrich August von Hayek (8 May 1899 – 23 March 1992), was an Austrian and British economist and philosopher, and a major critic of John Maynard Keynes.

If any twentieth-century economist was a Renaissance man, it was Friedrich Hayek. He made fundamental contributions in political theory, psychology, and economics. In a field in which the relevance of ideas often is eclipsed by expansions on an initial theory, many of his contributions are so remarkable that people still read them more than fifty years after they were written. Many graduate economics students today, for example, study his articles from the 1930s and 1940s on economics and knowledge, deriving insights that some of their elders in the economics profession still do not totally understand. It would not be surprising if a substantial minority of economists still read and learn from his articles in the year 2050. In his book Commanding Heights, Daniel Yergin called Hayek the “preeminent” economist of the last half of the twentieth century.

Hayek was the best-known advocate of what is now called Austrian economics. He was, in fact, the only major recent member of the Austrian school who was actually born and raised in Austria. After World War I, Hayek earned his doctorates in law and political science at the University of Vienna. Afterward he, together with other young economists Gottfried Haberler, Fritz Machlup, and Oskar Morgenstern, joined Ludwig von Mises’s private seminar—the Austrian equivalent of John Maynard Keynes’s “Cambridge Circus.” In 1927 Hayek became the director of the newly formed Austrian Institute for Business Cycle Research. In the early 1930s, at the invitation of Lionel Robbins, he moved to the faculty of the London School of Economics, where he stayed for eighteen years. He became a British citizen in 1938.

Most of Hayek’s work from the 1920s through the 1930s was in the Austrian theory of business cycles, capital theory, and monetary theory. Hayek saw a connection among all three. The major problem for any economy, he argued, is how people’s actions are coordinated. He noticed, as Adam Smith had, that the price system—free markets—did a remarkable job of coordinating people’s actions, even though that coordination was not part of anyone’s intent. The market, said Hayek, was a spontaneous order. By spontaneous Hayek meant unplanned—the market was not designed by anyone but evolved slowly as the result of human actions. But the market does not work perfectly. What causes the market, asked Hayek, to fail to coordinate people’s plans, so that at times large numbers of people are unemployed?

One cause, he said, was increases in the money supply by the central bank. Such increases, he argued in Prices and Production, would drive down interest rates, making credit artificially cheap. Businessmen would then make capital investments that they would not have made had they understood that they were getting a distorted price signal from the credit market. But capital investments are not homogeneous. Long-term investments are more sensitive to interest rates than short-term ones, just as long-term bonds are more interest-sensitive than treasury bills. Therefore, he concluded, artificially low interest rates not only cause investment to be artificially high, but also cause “malinvestment”—too much investment in long-term projects relative to short-term ones, and the boom turns into a bust. Hayek saw the bust as a healthy and necessary readjustment. The way to avoid the busts, he argued, is to avoid the booms that cause them.

Hayek and Keynes were building their models of the world at the same time. They were familiar with each other’s views and battled over their differences. Most economists believe that Keynes’s General Theory of Employment, Interest and Money (1936) won the war. Hayek, until his dying day, never believed that, and neither do other members of the Austrian school. Hayek believed that Keynesian policies to combat unemployment would inevitably cause inflation, and that to keep unemployment low, the central bank would have to increase the money supply faster and faster, causing inflation to get higher and higher. Hayek’s thought, which he expressed as early as 1958, is now accepted by mainstream economists (see phillips curve).

In the late 1930s and early 1940s, Hayek turned to the debate about whether socialist planning could work. He argued that it could not. The reason socialist economists thought central planning could work, argued Hayek, was that they thought planners could take the given economic data and allocate resources accordingly. But Hayek pointed out that the data are not “given.” The data do not exist, and cannot exist, in any one mind or small number of minds. Rather, each individual has knowledge about particular resources and potential opportunities for using these resources that a central planner can never have. The virtue of the free market, argued Hayek, is that it gives the maximum latitude for people to use information that only they have. In short, the market process generates the data. Without markets, data are almost nonexistent.

Mainstream economists and even many socialist economists (see socialism) now accept Hayek’s argument. Columbia University economist Jeffrey Sachs noted: “If you ask an economist where’s a good place to invest, which industries are going to grow, where the specialization is going to occur, the track record is pretty miserable. Economists don’t collect the on-the-ground information businessmen do. Every time Poland asks, Well, what are we going to be able to produce? I say I don’t know.”1

In 1944 Hayek also attacked socialism from a very different angle. From his vantage point in Austria, Hayek had observed Germany very closely in the 1920s and early 1930s. After he moved to Britain, he noticed that many British socialists were advocating some of the same policies for government control of people’s lives that he had seen advocated in Germany in the 1920s. He had also seen that the Nazis really were National Socialists; that is, they were nationalists and socialists. So Hayek wrote The Road to Serfdom to warn his fellow British citizens of the dangers of socialism. His basic argument was that government control of our economic lives amounts to totalitarianism. “Economic control is not merely control of a sector of human life which can be separated from the rest,” he wrote, “it is the control of the means for all our ends.”

To the surprise of some, John Maynard Keynes praised the book highly. On the book’s cover, Keynes is quoted as saying: “In my opinion it is a grand book.... Morally and philosophically I find myself in agreement with virtually the whole of it; and not only in agreement with it, but in deeply moved agreement.”

Although Hayek had intended The Road to Serfdom only for a British audience, it also sold well in the United States. Indeed, Reader’s Digest condensed it. With that book Hayek established himself as the world’s leading classical liberal; today he would be called a libertarian or market liberal. A few years later, along with Milton Friedman, George Stigler, and others, he formed the Mont Pelerin Society so that classical liberals could meet every two years and give each other moral support in what appeared to be a losing cause.

In 1950 Hayek became professor of social and moral sciences at the University of Chicago, where he stayed until 1962. During that time he worked on methodology, psychology, and political theory. In methodology Hayek attacked “scientism”—the imitation in social science of the methods of the physical sciences. His argument was that because social science, including economics, studies people and not objects, it can do so only by paying attention to human purposes. The Austrian school in the 1870s had already shown that the value of an item derives from its ability to fulfill human purposes. Hayek was arguing that social scientists more generally should take account of human purposes. His thoughts on the matter are in The Counter-Revolution of Science: Studies in the Abuse of Reason. In psychology Hayek wrote The Sensory Order: An Inquiry into the Foundations of Theoretical Psychology.

In political theory Hayek gave his view of the proper role of government in his book The Constitution of Liberty. It is actually a more expansive view of the proper role of government than many of his fellow classical liberals hold. He discussed the principles of freedom and based his policy proposals on those principles. His main objection to progressive taxation, for example, was not that it causes inefficiency but that it violates equality before the law. In the book’s postscript, “Why I Am Not a Conservative,” Hayek distinguished his classical liberalism from conservatism. Among his grounds for rejecting conservatism were that moral and religious ideals are not “proper objects of coercion” and that conservatism is hostile to internationalism and prone to a strident nationalism.

In 1962 Hayek returned to Europe as professor of economic policy at the University of Freiburg in Breisgau, West Germany, and stayed there until 1968. He then taught at the University of Salzburg in Austria until his retirement nine years later. His publications slowed substantially in the early 1970s. In 1974 he shared the Nobel Prize with Gunnar Myrdal “for their pioneering work in the theory of money and economic fluctuations and for their penetrating analysis of the interdependence of economic, social and institutional phenomena.” This award seemed to breathe new life into him, and he began publishing again, both in economics and in politics.

Many people get more conservative as they age. Hayek became more radical. Although he had favored central banking for most of his life, in the 1970s he began advocating denationalizing money. Private enterprises that issued distinct currencies, he argued, would have an incentive to maintain their currency’s purchasing power. Customers could choose from among competing currencies. Whether they would revert to a gold standard was a question that Hayek was too much of a believer in spontaneous order to predict. With the collapse of communism in Eastern Europe, some economic consultants have considered Hayek’s currency system as a replacement for fixed-rate currencies.

Hayek was still publishing at age eighty-nine. In his book The Fatal Conceit, he laid out some profound insights to explain the intellectuals’ attraction to socialism and then refuted the basis for their beliefs.

1931. “Richard Cantillon.” Translated by Micheál Ó Súilleabháin in the Journal of Libertarian Studies 7, no. 2 (1985): 217–247. Available online at: http://www.econlib.org/library/Essays/JlibSt/hykCnt1.html.

1944. The Road to Serfdom. Chicago: University of Chicago Press.

1952. The Counter-Revolution of Science: Studies on the Abuse of Reason. Glencoe, Ill.: Free Press.

1977. Foreword to Economics as a Coordination Problem: The Contributions of Friedrich A. Hayek by Gerald P. O’Driscoll Jr. Kansas City: Sheed, Andrews, and McMeel.

1995. Introduction to Selected Essays on Political Economy by Frédéric Bastiat. Trans. from the French by Seymour Cain. Edited by George B. de Huszar. Princeton: Van Nostrand, 1995. Available online at: http://www.econlib.org/library/Bastiat/basEss0.html#Introduc...