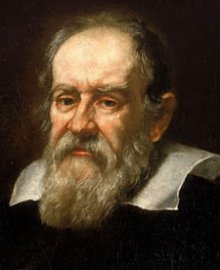 Displaying image 167 of 363 images in Astronomy.

Galileo Galilei was a Tuscan physicist, mathematician, astronomer, and philosopher who played a major role in the scientific revolution. His achievements include improvements to the telescope and consequent astronomical observations, and support for Copernicanism. His contributions to observational astronomy include the discovery of the four largest satellites of Jupiter and the observation and analysis of sunspots.