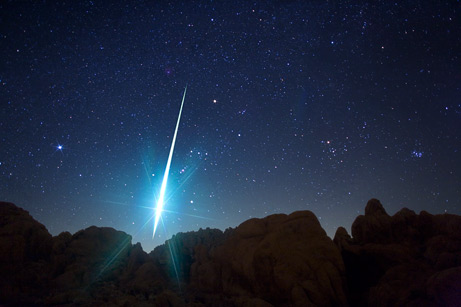 Displaying image 233 of 363 images in Astronomy.

Like a silver spear cast from the heavens, the bright streak of a Geminid meteor pierces the night sky over California's Mojave Desert during the annual meteor shower's December 2009 peak.

Geminids are slower than other shooting stars and are known to make beautiful long arcs across the sky. This could be because they're born of debris from a dormant comet and so are made mostly of hard, sun-baked rock that takes longer to burn up in Earth's atmosphere, experts suggest.