Image: Germany: The Edict of Restitution (1629) 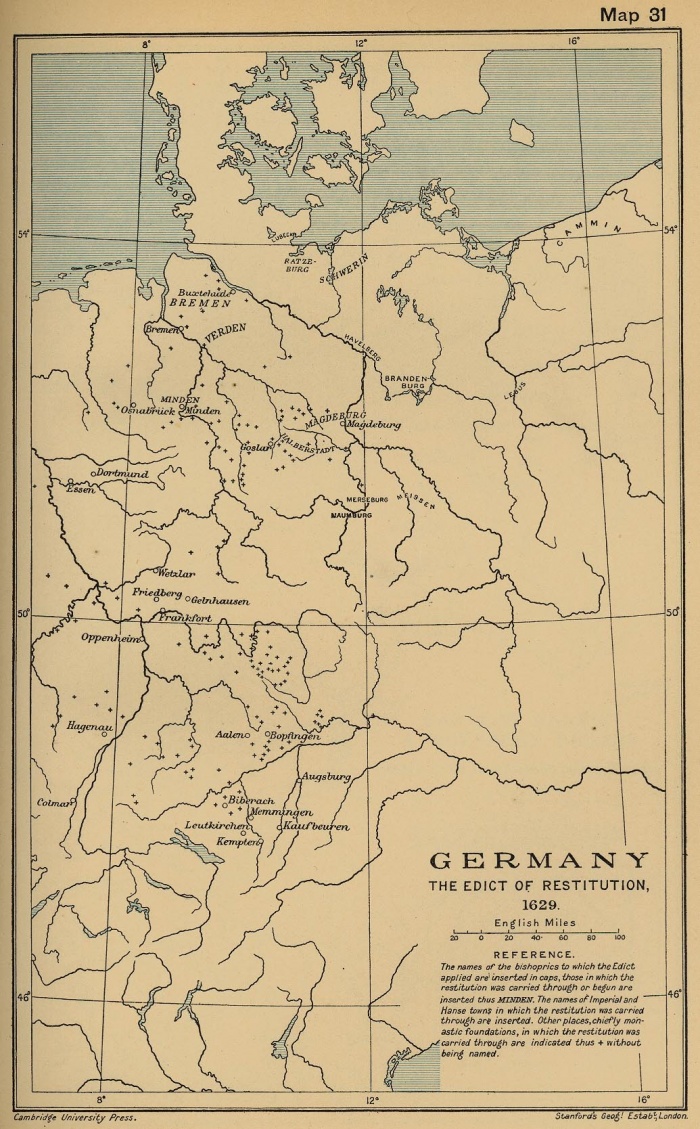 Displaying image 35 of 467 images in History.

"THE FIRST DECADE OF THE WAR
"In August 1619 the Estates of Bohemia deposed Ferdinand II, who had officially succeeded Emperor Matthias as king of Bohemia in March, and elected Frederick V, elector palatine, the leader of the Calvinists in Germany, in his stead. However, Frederick’s rule was short lived. In November 1620 his army suffered a crushing defeat in the Battle of the White Mountain near Prague against the emperor’s army, which had been reinforced by troops from the Bavarian-led Catholic League and by Spanish regiments. Whereas the Catholic League had decided to support Ferdinand, the Protestant Union preferred to stay neutral and was soon dissolved. In fact, some Protestant rulers, in particular John George of Saxony, openly supported the emperor.

The fact that Ferdinand had managed to have himself elected emperor in the summer of 1619 gave him an authority that few German rulers dared to challenge openly for the time being. The next years were marked by an almost unbroken series of Catholic victories in central Europe. The Palatinate was occupied by Bavarian and Spanish troops in 1622, the palatine electoral dignity was transferred to Maximilian of Bavaria, and the army of the Catholic League led by Count Johann Tserclaes of Tilly threatened to dismantle the remaining Protestant strongholds in northern Germany. The troops of the Dutch Republic were too busy defending their own country to intervene in Germany. In fact, the important Dutch fortress of Breda had to surrender in 1625 to Spanish troops, a victory immortalized by Velazquez in his famous painting, La Rendicion de Breda (1634–1635; The surrender of Breda). However, King Christian IV of Denmark, who was also, as duke of Holstein, a prince of the empire and who hoped to acquire various prince-bishoprics in northern Germany for members of his family, decided to stop Tilly’s advance in 1625. Hoping for financial and military support from the Netherlands and England—Charles I of England was the exiled elector palatine’s brother-in-law—he mobilized the Imperial Circle (Reichskreis) of Lower Saxony for the Protestant cause. However, he had not anticipated that the emperor would raise an army of his own (counting initially 30,000 soldiers and growing fast), commanded by Albrecht von Wallenstein, a Bohemian nobleman and the greatest military entrepreneur of his age. Christian’s troops were routed at Lutter am Barenberge (1626). Christian’s ally Charles I of England was equally unsuccessful in his fight at sea against Spain, and France, which might have given support to the opponents of the Habsburgs, was paralyzed by a Protestant revolt during the years 1625–1628, in which England became involved in 1627. Thus Ferdinand II was able to crush his enemies. Christian had to withdraw from the conflict and signed the Peace of Lubeck in 1629, giving up his claims to several prince-bishoprics in northern Germany but retaining Holstein and Schleswig. However, Ferdinand failed to exploit his success adequately. His allies in Germany, in particular Maximilian of Bavaria, were, in fact, increasingly apprehensive about the predominance of Habsburg power and the close cooperation between Ferdinand II and Spain. Moreover, they resented the arrogant and ruthless behavior of Ferdinand’s commander-in-chief, Wallenstein, who had imposed enormous financial burdens on friend and foe alike, raising contributions for his 100,000-man army almost everywhere in Germany. Wallenstein had to resign in 1630 under pressure from Maximilian of Bavaria and other princes.

Ferdinand tried to rebuild a united Catholic front in 1629 by passing the Edict of Restitution, which was designed to give all ecclesiastical property secularized since 1552/1555 back to the Roman Catholic Church. The potential consequences for Protestantism were disastrous. Protestantism was not outlawed but was likely to be reduced to the status of a barely tolerated and marginalized religious community in Germany."
Source: Steven Hause and William Maltby, Europe 1450 to 1789: Encyclopedia of The Early Modern World (Thomson Gale, 2004), Volume 6, Thirty Years’ War, pages 29-30