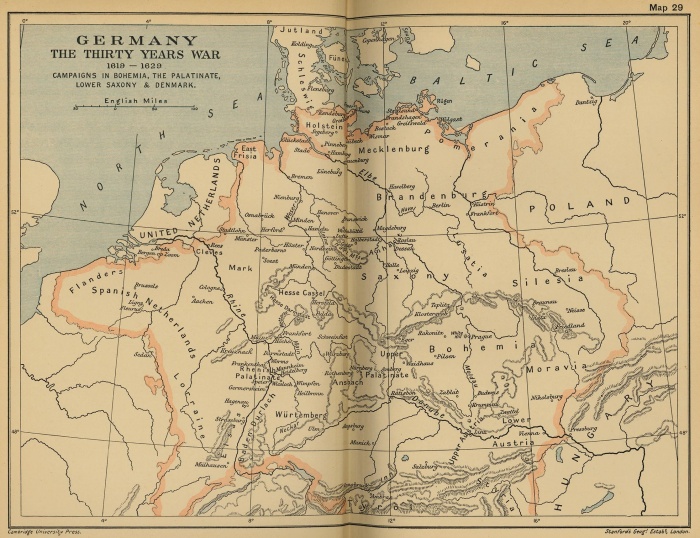 Displaying image 37 of 467 images in History.

"The resolution of the French wars and the death of Philip II in 1598 marked the end of a political cycle. The Netherlands continued to struggle under the leadership of William’s son, Maurice of Nassau (1567–1625), until a ten years’ truce was concluded in 1608, but it was a truce, not a treaty. Though Spain was financially exhausted, it still refused to recognize the Dutch state. War was expected to break out again when the truce expired in 1618. The war, when it came, was much more than a resumption of the Dutch Revolt. It involved all of the European states and turned central Europe into a battleground from 1618 to 1648.

"The first phase of the Thirty Years’ War began with a struggle for the crown of Bohemia. In 1555 the Peace of Augsburg had established the principle cuius regio, eius religio; that is, princes within the empire had the right to determine the religious beliefs of their subjects. Calvinists, however, were excluded from its provisions, and issues regarding the disposition of church properties and the conversion of bishops were left in dispute. Since then, two electoral principalities, the Palatinate and Brandenburg, had turned Calvinist, and several bishops had converted to Protestantism while retaining possession of their endowed lands. Violent quarrels arose over these issues and by 1610 the empire was divided into two armed camps: the Protestant Union and the Catholic League. The Bohemian controversy arose because Matthias, king of Bohemia in 1618, was also Holy Roman emperor, a Catholic Hapsburg, and uncle of the future emperor Ferdinand II of Austria (1578–1637). Matthias was determined to preserve Bohemia for the faith and for his family, and in 1617 he secured the election of Ferdinand as his successor to the throne of Bohemia. This election was opposed by many of the Bohemian gentry and lesser nobility. They were, for the most part, Calvinists or Hussites and feared persecution from the devout Ferdinand and his Jesuit advisers. On May 23, 1618, an assembly of Bohemians threw three of the Hapsburg’s regents from a window of the Hradschin palace, appointed a provisional government, and began to raise an army.

"The “Defenestration of Prague” was an act of war. Revolt spread to the hereditary lands, threatening not only Bohemia but also the basic integrity of the Hapsburg state. Worse yet, the king of Bohemia was an elector of the empire. If the Bohemians elected a Protestant, the Protestants would have a majority of electors just as a new imperial election appeared imminent. Matthias was in poor health and Ferdinand hoped to succeed him as king of Bohemia as well as emperor. Ferdinand needed time to muster support, but in June 1619 he invaded Bohemia with the army of the Catholic League, drawn largely from his ally, Bavaria. The Bohemians responded by offering the crown to a Calvinist prince, Frederick V (1596–1632), elector palatine and son-inlaw of James I of England. Frederick accepted, after the death of Matthias and the election of Ferdinand as emperor on August 28. It was a tragic mistake. He was supported by only a part of the Protestant Union. James I refused to help, and a diversionary attack on Hungary by Bethlen Gabor (1580–1629), the Calvinist prince of Transylvania, was eventually contained by the Hapsburgs. Finally, on November 8, 1620, Frederick and his Protestant allies were soundly defeated at the White Mountain near Prague. Frederick’s cause was now hopeless. The Spanish truce with the Netherlands had expired, and the palatinate lay squarely across the route by which Spanish troops and supplies were sent to the Low Countries. While Frederick’s forces fought to preserve his claim to Bohemia, a Spanish army invaded his ancestral lands. "
Source: Steven Hause and William Maltby, Western Civilization: A History of European Society (Cengage Learning, 2004), chapter 15

Fidel Carter wrote 8 years ago.
The Publishing of the Bible in 1611 Lead to so many
questions about the validity of the catholic belief as it
stood. These questions remain unanswered.