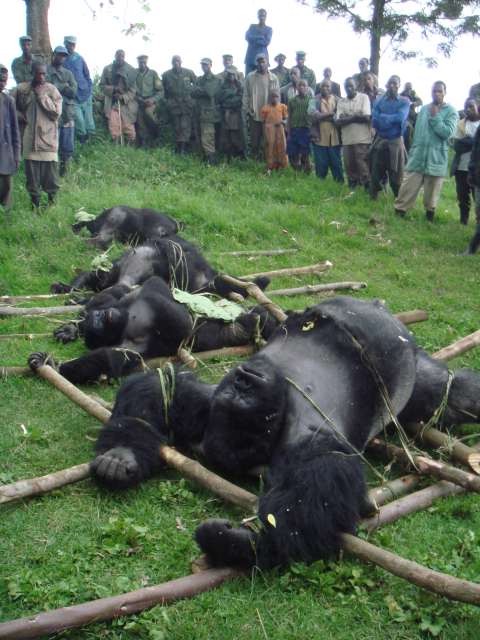 Displaying image 2 of 16 images in Biology.

Earthtimes online report “National Geographic have announced that On Tuesday, July 1, 2008, at 10 p.m. ET/PT, National Geographic Channel’s “Explorer: Gorilla Murders” reports from eastern DRC, one of the most dangerous places on earth, with the full untold story behind the massacre. Central to the story is Stirton, a South African war photographer with a long history in the region. He was on-location when the murdered gorillas were found and returned to the park for National Geographic to investigate who was behind the killings. In addition to the world television premiere, Stirton’s and writer Mark Jenkins’ reporting is the July cover story for National Geographic magazine. With the first Western journalists to gain access to the gorilla sector of the park since the killings occurred, National Geographic presents exclusive testimonials from eyewitnesses, including Stirton, who discuss the hunt to bring the perpetrators to justice and the desperate efforts to protect the remaining gorillas, including one miraculous infant whose family was among those massacred”.

We followed the gorilla killings on our Gorilla Protection blog on WildlifeDirect and were the first on the ground. For more information about Nat Geo’s Gorilla murders show go to earthtimes online and National Geographic TV shows.

Last week at the fourth China International Press Photo Contest (CHIPP) awards ceremony in Shanghai, 78 works by 30 Chinese photographers and 34 from overseas were unveiled. Prizes were presented in 8 categories. Initially attracting 2,456 photojournalists and photographers from 72 countries and regions, the contest received a total of 28,318 entries in its preliminary phase. “Mountain Gorillas Killed in Democratic Republic of Congo,” a photo taken by Brent Stirton from Getty Images, was named the Best Photograph of 2007. In the picture, conservation rangers from a Congo anti-poaching unit work with villagers to evacuate the body of a mountain gorilla killed in mysterious circumstances at the Virunga National Park in the Democratic Republic of Congo in Africa.