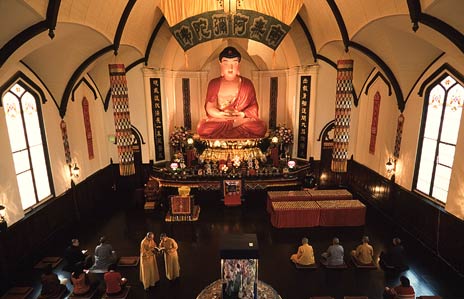 While most temples focus on one tradition to impart the teachings of the Buddha, the Hua Zang Si Temple in San Francisco, California, integrates practices from all Buddhist sects. Housed in an old German Lutheran church, the temple is run by resident nuns whose daily activities include meditation and discussion of Buddhist teachings (above), in view of a 21-foot (6-meter) Amitabha Buddha, the Buddha of Infinite Light who is revered by sects who chant his name as part of the path to enlightenment.