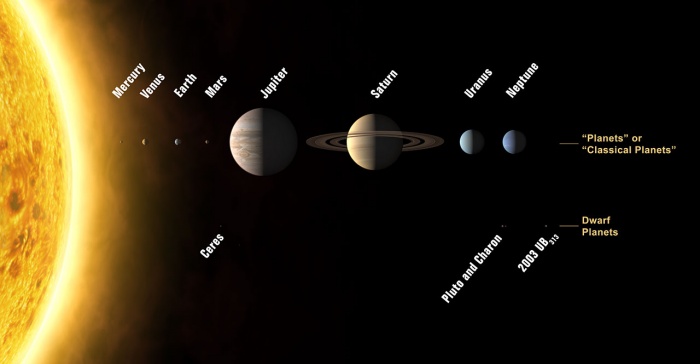 Displaying image 249 of 363 images in Astronomy.

The first half of the Closing Ceremony of the 2006 International Astronomical Union (IAU) General Assembly has just concluded. The results of the Resolution votes are outlined here.

1. Resolution 1 for GA-XXVI : "Precession Theory and Definition of the Ecliptic"

2. Resolution 2 for GA-XXVI: "Supplement to the IAU 2000 Resolutions on reference systems"

4. Resolution 4 for GA-XXVI: "Endorsement of the Washington Charter for Communicating Astronomy with the Public"

6. Resolution 6A: "Definition of Pluto-class objects"

The IAU members gathered at the 2006 General Assembly agreed that a "planet" is defined as a celestial body that (a) is in orbit around the Sun, (b) has sufficient mass for its self-gravity to overcome rigid body forces so that it assumes a hydrostatic equilibrium (nearly round) shape, and (c) has cleared the neighbourhood around its orbit.

The "dwarf planet" Pluto is recognised as an important proto-type of a new class of trans-Neptunian objects. The IAU will set up a process to name these objects.

Resolution 5A: "Definition of Planet" was not counted but was passed with a great majority.

Resolution 5B: "Definition of Classical Planet" had 91 votes in favour, but many more against so there was no count.

Resolution 6A: "Definition of Pluto-class objects" was passed with 237 votes in favour, 157 against and 17 abstentions.

Resolution 6B: "Definition of Plutonian Objects" had 183 votes in favour and 186 votes against.