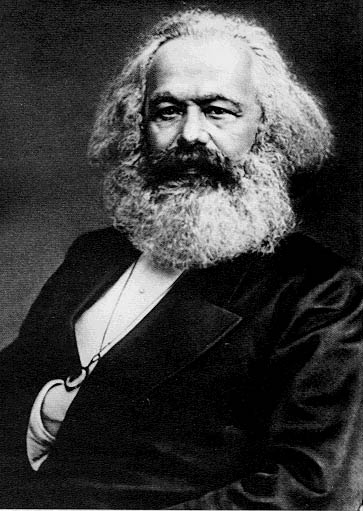 Displaying image 23 of 25 images in Economics.

Karl Heinrich Marx (May 5, 1818 – March 14, 1883) was a German philosopher, political economist, historian, political theorist, sociologist, communist and revolutionary, whose ideas are credited as the foundation of modern communism. Marx summarized his approach in the first line of the first chapter of The Communist Manifesto, published in 1848: “The history of all hitherto existing society is the history of class struggles.”

Marx argued that capitalism, like previous socioeconomic systems, will inevitably produce internal tensions which will lead to its destruction. Just as capitalism replaced feudalism, he believed socialism will, in its turn, replace capitalism, and lead to a stateless, classless society called pure communism. This would emerge after a transitional period called the "dictatorship of the proletariat": a period sometimes referred to as the "workers state" or "workers' democracy" .

See, for example, Marx's comments in section one of The Communist Manifesto on feudalism, capitalism, and the role internal social contradictions play in the historical process: "We see then: the means of production and of exchange, on whose foundation the bourgeoisie built itself up, were generated in feudal society. At a certain stage in the development of these means of production and of exchange, the conditions under which feudal society produced and exchanged...the feudal relations of property became no longer compatible with the already developed productive forces; they became so many fetters. They had to be burst asunder; they were burst asunder. Into their place stepped free competition, accompanied by a social and political constitution adapted in it, and the economic and political sway of the bourgeois class. A similar movement is going on before our own eyes.... The productive forces at the disposal of society no longer tend to further the development of the conditions of bourgeois property; on the contrary, they have become too powerful for these conditions, by which they are fettered, and so soon as they overcome these fetters, they bring disorder into the whole of bourgeois society, endanger the existence of bourgeois property."

On the one hand, Marx argued for a systemic understanding of socio-economic change. He argued that the structural contradictions within capitalism necessitate its end, giving way to communism:

The development of Modern Industry, therefore, cuts from under its feet the very foundation on which the bourgeoisie produces and appropriates products. What the bourgeoisie, therefore, produces, above all, are its own grave-diggers. Its fall and the victory of the proletariat are equally inevitable.

On the other hand, Marx argued that socio-economic change occurred through organized revolutionary action. He argued that capitalism will end through the organized actions of an international working class: "Communism is for us not a state of affairs which is to be established, an ideal to which reality [will] have to adjust itself. We call communism the real movement which abolishes the present state of things. The conditions of this movement result from the premises now in existence." (from The German Ideology)

While Marx remained a relatively obscure figure in his own lifetime, his ideas began to exert a major influence on workers' movements shortly after his death. This influence gained added impetus with the victory of the Marxist Bolsheviks in the Russian October Revolution in 1917, and few parts of the world remained significantly untouched by Marxian ideas in the course of the twentieth century.