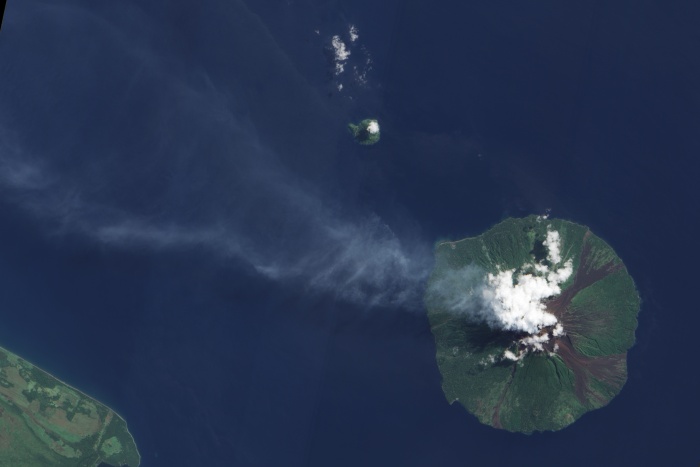 Displaying image 24 of 28 images in Geology.

Bright white clouds hover over the volcano’s summit. Clouds often collect over peaks, but these clouds could result from water vapour released by the volcano. Slightly darker in colour, a pale blue-grey plume blows west-north-west from the summit and over the Bismarck Sea. Just 10 kilometres across, Manam is a stratovolcano composed of alternating layers of ash, lava, and rocks from prior eruptions. The circular island sports four radial valleys spaced roughly 90 degrees apart, and these valleys have historically channelled lava and pyroclastic flows—composed of hot rock, gas and ash—sometimes all the way to the coast. Evidence of earlier volcanic activity appears as rivulets of rock that interrupt the vegetation coating much of the island. Although clouds hide the summit in this image, the summit is known to support two craters devoid of vegetation.