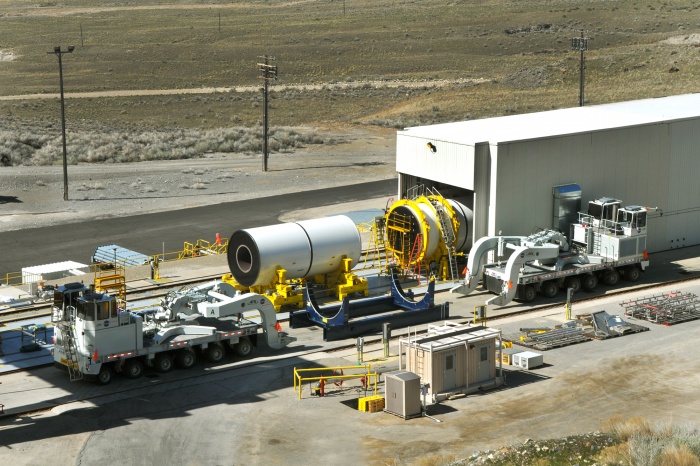 Displaying image 293 of 363 images in Astronomy.

On April 12, NASA began moving segments of the second Ares I rocket's five-segment development motor, or DM-2, from a production facility in Promontory, Utah, to the nearby test stand in preparation for the second full-duration ground test scheduled for September 2010. Engineers from NASA's Marshall Space Flight Center in Huntsville, Ala., manage the team that will conduct this full-scale motor test – designed to advance the knowledge, safety, technology and capability of solids rocket motors. The DM-2 motor includes several upgrades and technology improvements implemented by NASA and ATK engineers. Engineers will use the measurements gathered from the test to evaluate thrust, roll control, acoustics, motor vibrations, nozzle modifications and insulation upgrade. Following ATK’s manufacturing procedures, the segments were cast and then went through a complete X-ray inspection. The moving of segments to the test area will continue at a rate of one per week until the final segment arrives May 13. The time between segments allows for insertion into the test stand and assembly as each piece arrives. Manufactured by ATK Space Systems, a division of Alliant Techsystems of Brigham City, Utah, the prime contractor for the Ares first stage, the motor is similar to the reusable solid rocket booster currently used by the space shuttle, although the new motor is one segment longer and has been modified to accommodate current mission objectives. (Credit: NASA/ATK)
Views: 1,297
Added: 11 years ago.
Topic: 1.1.3 NASA Constellation Program