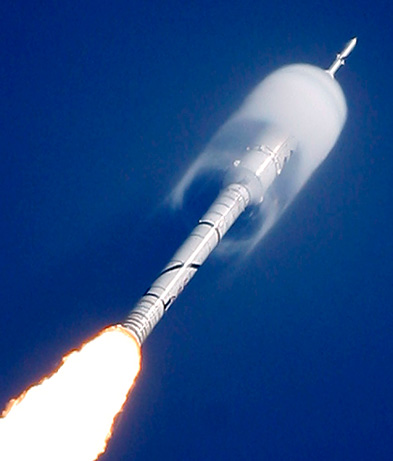 Displaying image 239 of 363 images in Astronomy.

A cone of moisture surrounds part of NASA's Ares I-X rocket during its suborbital test flight over Florida's Kennedy Space Center in October.

Such "sonic boom clouds" can occur when aircraft fly fast enough to cool the air around them, causing moisture in the air to condense. Shortly after launch, the Ares I-X rocket was traveling at more than four times the speed of sound.

The rocket's six-minute, U.S. $450-million flight was designed to help NASA refine its plans for Ares I, the next-generation craft that--combined with the Orion crew capsule--is slated to replace the aging space shuttle as the U.S.'s primary means of ferrying humans and cargo into space.