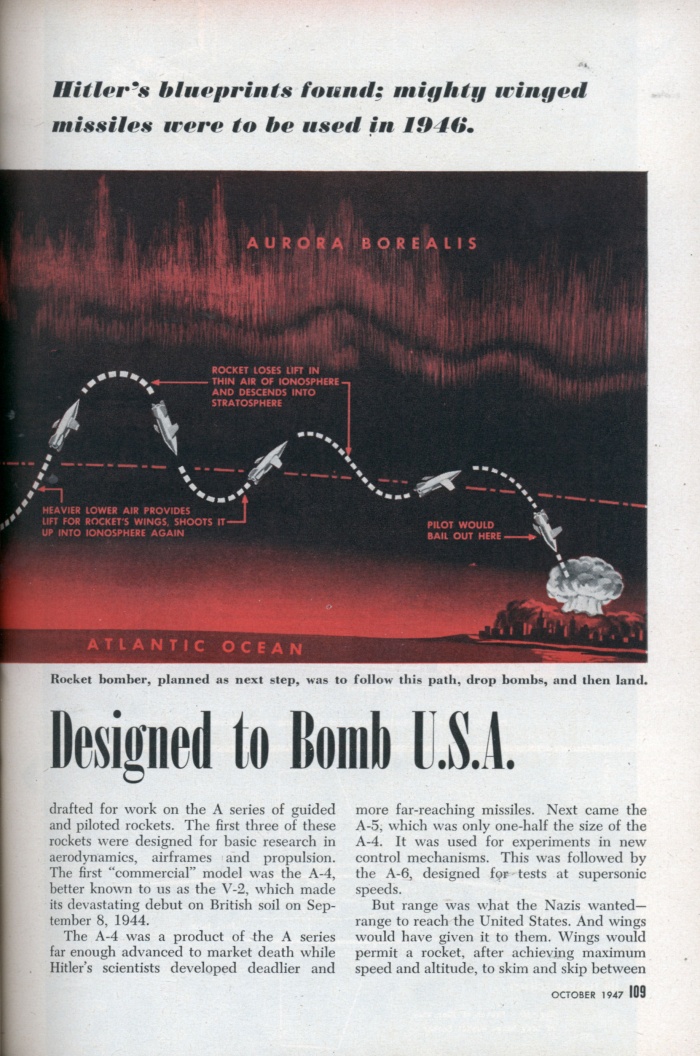 Hitler’s blueprints found; mighty winged missiles were to be used in 1946

WHEN the Allied invasion upset the Nazis’ plans, they had a supersonic, 3,000-mile-range rocket in the works. Already in the blueprint stage was its successor â€”a true rocket bomber of equal speed and range. Actual sketches and plans for it are shown on page 110.

Rocket projects were Hitler’s equivalent of America’s Manhattan District Project. Blueprints for atomic bombs are still tightly guarded secrets, but the Nazis’ detailed plans for push-button, transoceanic war have now been exposed. They are a clue to developments that may reasonably be expected if there is another war.

If the invasion of Europe had been delayed six months, German robot missiles and piloted rocket bombers would have been hurtling across the Atlantic. Rocket bombing of New York was scheduled for early 1946.

In 1943 Germany’s top scientists were drafted for work on the A series of guided and piloted rockets. The first three of these rockets were designed for basic research in aerodynamics, airframes and propulsion. The first “commercial” model was the A-4, better known to us as the V-2, which made its devastating debut on British soil on September 8, 1944.

The A-4 was a product of the A series far enough advanced to market death while Hitler’s scientists developed deadlier and more far-reaching missiles. Next came the A-5, which was only one-half the size of the A-4. It was used for experiments in new control mechanisms. This was followed by the A-6, designed for tests at supersonic speeds.

But range was what the Nazis wantedâ€” range to reach the United States. And wings would have given it to them. Wings would permit a rocket, after achieving maximum speed and altitude, to skim and skip between the rarefied air of the ionosphere and the heavier air of the atmosphere. The experimental model was the A-7, a winged version of the small A-5; then the A-4 (V-2) sprouted wings to become the A-8, followed by the A-9, which used acid instead of oxygen as an oxidizer. The A-9’s fuel pumps were driven by a turbine using hydrogen peroxide and calcium permanganate.

Next problem was to get the A-9 up into the ionosphere for the start of its roller-coaster journey across the Atlantic. Its own fuel supply was insufficient. The answer was the A-10, a 190,000-pound booster rocket, of which 140,000 pounds way to have been fuel. This booster was to have carried the A-9 up into the ionosphere at 2,450 miles an hour. When the fuel was exhausted, the booster could be released and the A-9 rocket motor would take over, increasing the missile’s speed to 5,870 miles an hour.

Hitler’s scientists, with typical German thoroughness, tried everything. They designed some 138 missiles of various types. For power plants they used reciprocating engines with jet exhaust, gas turbines, turbojets, ramjets and pure rockets. In fuels they experimented with nitric acid and mixtures of xylidines and amine compounds; others included gaseous oxygen and powdered coal for a coal ramjet.


In the field of controls they branched out from the early method of direct wire control from a “mother” plane to the use of radio, radar, continuous wave, acoustics, infrared, light beams and magnetics. One missile had a television set in the nose. Turned on about 2-1/2 miles from the target, it enabled controllers at the home base to direct the rocket visually at a specific building or installation, such as an ammunition dump.

One control device refused to be controlled. In this case the missile was supposed to follow a beam of energy from a radar unit, which aimed it at an enemy target. In a test firing, however, the missile reversed itself in flight and followed the beam for a direct hit on the control station. After that the Nazi scientists favored “homing” or “seeking” devices sensitive to heat or sound.

The Nazis had other troubles, too. They were behind us in certain essential research, such as nuclear energy for warheads and alloys that would resist the terrific heat developed by rocket-powered engines. The acids they used had a tendency to corrode tanks and pipes; explosions on the ground were frequent and the fatalities high. But still there is no doubt that Hitler’s scientists were 10 years ahead of us in “pushbutton” warfare.

Although the A-9-plus-A-10 combination was the last word in the A series of long-range missiles, all design studies and computations had been made for the next stepâ€” the true rocket bomber. Equipped with landing gear and a bomb bay, it would have been able to drop its bombs and alight after its transoceanic trip. With a liquid-fuel engine weighing 2-1/2 tons and developing a thrust of 200,000 pounds, it was to have spanned the Atlantic from Germany to New York in 40 minutes.

Only time prevented Hitler from realizing a boast made in 1944 after watching early firing trials of his “secret weapons”:

“. . . These are not the product of dreamers . . . and the whole world will soon feel their effect.”