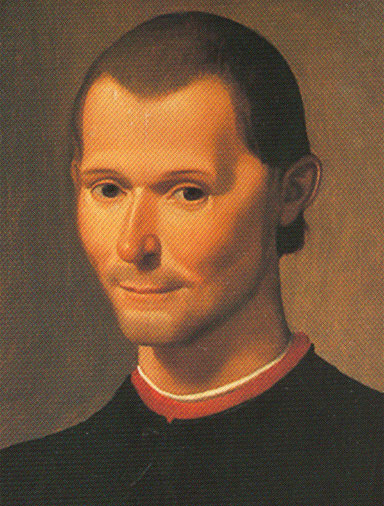 Niccolò di Bernardo dei Machiavelli (3 May 1469 – 21 June 1527) was an Italian philosopher, writer, and politician and is considered one of the main founders of modern political science. He was a diplomat, political philosopher, musician, poet and playwright, but, foremost, he was a Civil Servant of the Florentine Republic. In June of 1498, after the ouster and execution of Girolamo Savonarola, the Great Council elected Machiavelli as Secretary to the second Chancery of the Republic of Florence.

Like Leonardo da Vinci, Machiavelli is considered a typical example of the Renaissance Man. He is most famous for a short political treatise, The Prince, a work of realist political theory; however, both it and the more substantial Discourses on Livy went unpublished until 1532—after Machiavelli's death. Although he privately circulated The Prince among friends, the only work he published in his life was The Art of War, about high-military science. Since the sixteenth century, generations of politicians remain attracted and repelled by the cynical (realist) approach to power posited in The Prince, the Discourses, and the History. Whatever his personal intentions, which are still debated today, his surname yielded the modern political word Machiavellianism—the use of cunning and deceitful tactics in politics or in general.

Machiavelli was born in Florence, Italy, the third son of attorney Bernardo di Niccolò Machiavelli, and his wife, Bartolommea di Stefano Nelli. The Machiavelli family are believed descended from the old marquesses of Tuscany, and to have produced thirteen Florentine Gonfalonieres of Justice.

Rigorously trained to manhood by his father, Machiavelli was educated to learn grammar, rhetoric and to speak Latin. He did not learn Greek, even though Florence was at the time one of the centers of Greek Scholarship in Europe. In 1494, he entered Florentine government service as a clerk and as an ambassador; later that year, Florence restored the republic — expelling the Medici family, who had ruled Florence for some sixty years. He was in a diplomatic council responsible for negotiation and military affairs, undertaking, between 1499 and 1512, diplomatic missions to the courts of Louis XII in France, Ferdinand II of Aragón, in Spain, and the Papacy in Rome, in Italy proper. Moreover, from 1502 to 1503, he witnessed the effective state-building methods of Soldier-Churchman Cesare Borgia who was then enlarging his central Italian territories.

Between 1503 and 1506, Machiavelli was responsible for the Florentine militia, including the City’s defence. He distrusted mercenaries (cf. Discourses, The Prince), preferring a politically-invested citizen-militia, a philosophy that bore fruit — his command of Florentine citizen-soldiers defeated Pisa in 1509; yet, in August of 1512, the Medici, helped by Pope Julius II, used Spanish troops to defeat the Florentines at Prato; Piero Soderini resigned as Florentine head of state, and left in exile; then, the Florentine city-state and the Republic were dissolved. For his significant role in the republic's anti-Medici government, Niccolò Machiavelli was deposed from office, and, in 1513, was accused of conspiracy, and arrested. Despite torture "with the rope" (the prisoner is hanged from his bound wrists, from the back, forcing the arms to bear the body's weight, thus dislocating the shoulders), he denied involvement and was released; then, retiring to his estate, at Santa Andrea in Percussina, near Florence, he wrote the political treatises that earned his intellectual place in the development of political philosophy and political conduct.

Machiavelli's cenotaph in the Santa Croce Church in Florence

In a letter to Francesco Vettori, he described his exile:

When evening comes, I return home [from work and from the local tavern] and go to my study. On the threshold, I strip naked, taking off my muddy, sweaty work day clothes, and put on the robes of court and palace, and, in this graver dress, I enter the courts of the ancients, and am welcomed by them, and there I taste the food that alone is mine, and for which I was born. And there I make bold to speak to them and ask the motives of their actions, and they, in their humanity, reply to me. And for the space of four hours I forget the world, remember no vexation, fear poverty no more, tremble no more at death; I pass indeed into their world.

As a writer, Machiavelli identified the unifying theme in The Prince and the Discorsi:

All cities that ever, at any time, have been ruled by an absolute prince, by aristocrats, or by the people, have had for their protection force combined with prudence, because the latter is not enough alone, and the first either does not produce things, or when they are produced, does not maintain them. Force and prudence, then, are the might of all the governments that ever have been or will be in the world.

Machiavelli died in 1527. His grave site is unknown, but a cenotaph honouring him was erected at the Church of Santa Croce, in Florence. The Latin legend reads: TANTO NOMINI NULLUM PAR ELOGIUM (For so great a name, no praise is adequate and No elegy is equal to such a name).