Image: Part of group of 127 granite monoliths, 3m high, discovered in the Amazon 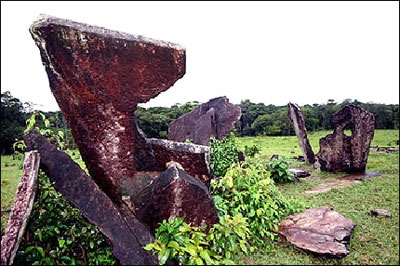 Displaying image 4 of 4 images in Anthropology.

The collection of monoliths has been described as the Amazon Stonehenge.

Part of group of 127 granite monoliths up to three metres high discovered in the middle of the Amazonian forest, in the state of Amapa, northern Brazil. (AFP)

Archaeologists have discovered a pre-colonial astrological observatory possibly 2,000 years old in the Amazon basin near French Guiana, a report has said.

"Only a society with a complex culture could have built such a monument," archaeologist Mariana Petry Cabral, of the Amapa Institute of Scientific and Technological Research (IEPA), told O Globo newspaper.

The observatory was built of 127 blocks of granite each three metres high and regularly placed in circles in an open field, she said.

Ms Cabral said the site resembles a temple which could have been used as an observatory, because the blocks are positioned to mark the winter solstice.

In December, the path of the sun allows rays to pass through a hole in one of the blocks, possibly to calculate agricultural activity and religious rituals.

Its exact age has been difficult to determine, but based on ceramic fragments found nearby, archaeologists estimate it between 500 and 2,000 years old.

The discovery is in Calcoene, 390 kilometres from Macapa, the capital of Amapa state, near Brazil's border with French Guyana.

Archaeologists said the find holds mysteries similar to Stonehenge, in Salisbury, England, another monument of huge stones, whose purpose is also unclear.