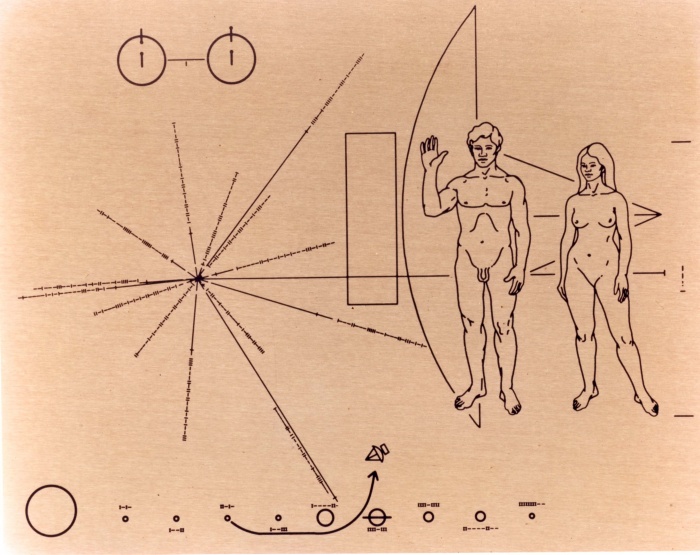 Displaying image 312 of 363 images in Astronomy.

Not yet rated
Not yet rated
No
The Pioneer plaques are a pair of gold-anodized aluminum plaques which were placed on board the 1972 Pioneer 10 and 1973 Pioneer 11 spacecraft, featuring a pictorial message, in case either Pioneer 10 or 11 are intercepted by extraterrestrial life. The plaques show the nude figures of a human male and female along with several symbols that are designed to provide information about the origin of the spacecraft. The Pioneer spacecraft were the first human-built objects to leave the solar system. The plaques were attached to the spacecraft's antenna support struts in a position that would shield them from erosion by stellar dust.

The Voyager Golden Record, a much more complex and detailed message using (then) state-of-the-art media, was attached to the Voyager spacecraft launched in 1977. The original idea, that the Pioneer spacecraft should carry a message from humankind, was first mentioned by Eric Burgess when he visited the Jet Propulsion Laboratory in Pasadena, California during the Mariner 9 mission. He approached Carl Sagan, who had lectured about communication with extraterrestrial intelligences at a conference in Crimea. Sagan was enthusiastic about the idea of sending a message with the Pioneer spacecraft. NASA agreed to the plan and gave him three weeks to prepare a message. Together with Frank Drake he designed the plaque, and the artwork was prepared by Sagan's then-wife Linda Salzman Sagan.