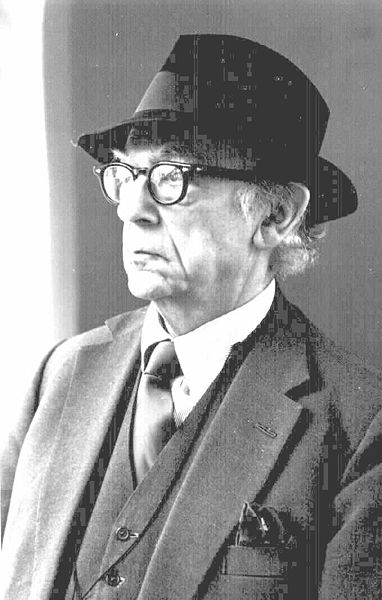 Sir Isaiah Berlin, OM (6 June 1909 – 5 November 1997) was a philosopher and historian of ideas, regarded as one of the leading liberal thinkers of the twentieth century. He excelled as an essayist, lecturer and conversationalist; and as a brilliant speaker who delivered, rapidly and spontaneously, richly allusive and coherently structured material, whether for a lecture series at Oxford University or as a broadcaster on the BBC Third Programme, usually without a script. Many of his essays and lectures were later collected in book form.

Born in Riga, now capital of Latvia, then part of the Russian Empire, he was the first person of Jewish descent to be elected to a prize fellowship at All Souls College, Oxford. From 1957 to 1967, he was Chichele Professor of Social and Political Theory at the University of Oxford. He was president of the Aristotelian Society from 1963 to 1964. In 1966, he helped to found Wolfson College, Oxford, and became its first President. He was knighted in 1957, and was awarded the Order of Merit in 1971. He was President of the British Academy from 1974 to 1978. He also received the 1979 Jerusalem Prize for his writings on individual freedom. Berlin's work on liberal theory has had a lasting influence.

Berlin was born as an only child into a wealthy Jewish family, the son of Mendel Berlin, a timber industrialist and lineal descendant of Israel ben Eliezer, and his wife Marie, née Volshonok. He spent his childhood in Riga (now capital of Latvia), and later lived in Andreapol´ (a small timber town near Pskov, effectively owned by the family business) and Saint Petersburg, witnessing both the February and October Revolutions of 1917.

Feeling increasingly oppressed by life under Bolshevik rule, the family left Petrograd on October 5, 1920, for Riga, but encounters with anti-Semitism and difficulties with the Latvian authorities convinced them to leave, and they moved to Britain in early 1921 (Mendel in January, Isaiah and Marie at the beginning of February), when Berlin was eleven. In London, he lived in Surbiton, South Kensington, and later Hampstead. His English was virtually nonexistent at first, but he became fluent within a year. He was educated at London's St. Paul's school, then at Corpus Christi College, Oxford, where he studied Greats (Classics) and PPE (Philosophy, Politics and Economics). As an undergraduate, he notably befriended A. J. Ayer (with whom he was to share a friendly rivalry for the rest of his life), Stuart Hampshire, Maurice Bowra and J. L. Austin. He was to remain at Oxford for the rest of his life, apart from a period working for British Information Services in New York from 1940 to 1942, and the British embassies in Washington, DC, and Moscow from then until 1946. Meetings with Anna Akhmatova in Leningrad in autumn 1945 and January 1946 had a powerful effect on both of them, and serious repercussions for Akhmatova (who memorialized the meetings in her poetry). In 1956, he married Aline Halban, née de Gunzbourg.

Berlin died in Oxford in 1997, aged 88. He is buried there in Wolvercote Cemetery.

Berlin is best known for his essay "Two Concepts of Liberty", delivered in 1958 as his inaugural lecture as Chichele Professor of Social and Political Theory at Oxford. He defined negative liberty as the absence of constraints on, or interference with, agents' possible action. Greater "negative freedom" meant fewer restrictions on possible action. Berlin associated positive liberty with the idea of self-mastery, or the capacity to determine oneself, to be in control of one's destiny. While Berlin granted that both concepts of liberty represent valid human ideals, as a matter of history the positive concept of liberty has proven particularly susceptible to political abuse.

Berlin contended that under the influence of Jean-Jacques Rousseau, Immanuel Kant and G. W. F. Hegel (all committed to the positive concept of liberty), European political thinkers often equated liberty with forms of political discipline or constraint. This became politically dangerous when notions of positive liberty were, in the nineteenth century, used to defend nationalism, self-determination and the Communist idea of collective rational control over human destiny. Berlin argued that, following this line of thought, demands for freedom paradoxically become demands for forms of collective control and discipline – those deemed necessary for the "self-mastery" or self-determination of nations, classes, democratic communities, and even humanity as a whole. There is thus an elective affinity, for Berlin, between positive liberty and political totalitarianism.

Conversely, negative liberty represents a different, perhaps safer, understanding of the concept of liberty. Its proponents (such as Jeremy Bentham and John Stuart Mill) insisted that constraint and discipline were the antithesis of liberty and so were (and are) less prone to confusing liberty and constraint in the manner of the philosophical harbingers of modern totalitarianism. It is this concept of Negative Liberty that Isaiah Berlin supported. It dominated heavily his early chapters in his third lecture.

This negative liberty is central to the claim for toleration due to incommensurability. This concept is mirrored in the work of Joseph Raz.

Berlin's espousal of negative liberty, his hatred of totalitarianism and his experience of Russia in the revolution and through his contact with the poet Anna Akhmatova made him an enemy of the Soviet Union and he was one of the leading public intellectuals in the ideological battle against Communism during the Cold War.

Berlin's essay "Historical Inevitability" (1954) focused on a controversy in the philosophy of history. In Berlin's words, the choice is whether one believes that "the lives of entire peoples and societies have been decisively influenced by exceptional individuals" or, conversely, that whatever happens occurs as a result of impersonal forces oblivious to human intentions. Berlin is also well known for his writings on Russian intellectual history, most of which are collected in Russian Thinkers (1978; 2nd ed., 2008), edited, like most of Berlin's work, by Henry Hardy (in the case of this volume, jointly with Aileen Kelly).

Berlin's writings on the Enlightenment and its critics (especially Giambattista Vico, Johann Gottfried Herder and Johann Georg Hamann)– for whom Berlin used the term "the Counter-Enlightenment" – and particularly Romanticism, contributed to his advocacy of an ethical theory now usually termed value pluralism. For Berlin, values are creations of mankind, rather than products of nature waiting to be discovered, though he also argued that the nature of mankind is such that certain values – for example, the importance of individual liberty – will hold true across cultures, which is part of what he meant when he called his position "objective pluralism". With his account of value pluralism, he proposed the view that moral values may be equally, or rather incommensurably, valid and yet incompatible, and may therefore come into conflict with one another in a way that admits of no resolution without reference to particular contexts of decision. When values clash, it may not be that one is more important than the other. Keeping a promise may conflict with the pursuit of truth; liberty may clash with social justice. Moral conflicts are "an intrinsic, irremovable element in human life". "These collisions of values are of the essence of what they are and what we are."