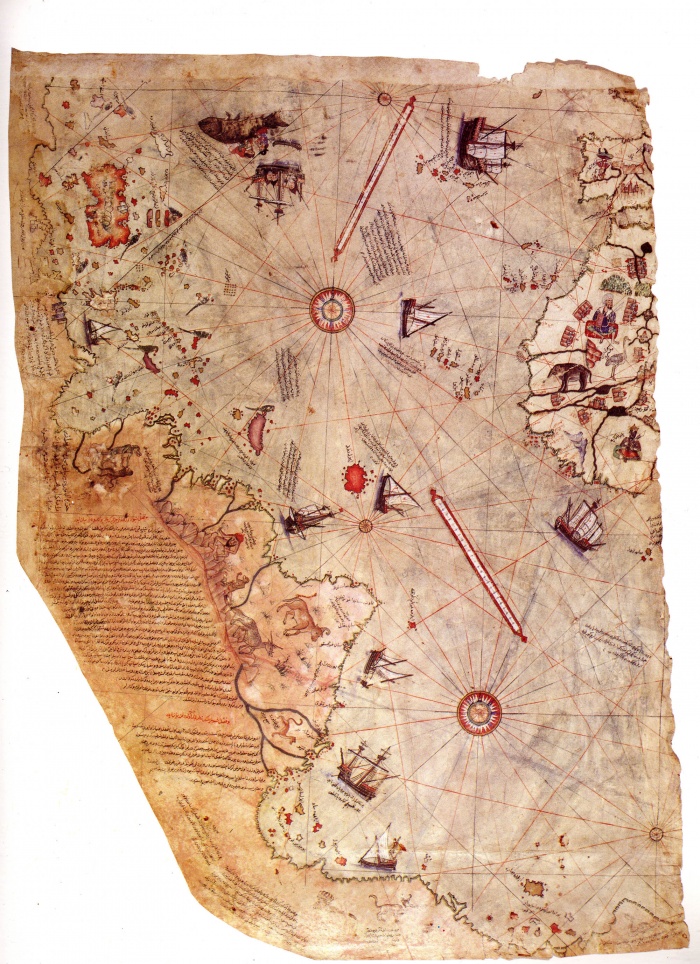 The Piri Reis map is a pre-modern world map compiled in 1513 from military intelligence by the Ottoman-Turkish admiral and cartographer Piri Reis. The half of the map that survives shows the western coasts of Europe and North Africa and the coast of Brazil with reasonable accuracy. Various Atlantic islands including the Azores and Canary Islands are depicted, as is the mythical island of Antillia and possibly Japan. The historical importance of the map lies in its demonstration of the extent of Portuguese exploration of the New World by approximately 1510, and in its claim to have used Columbus's maps, otherwise lost, as a source.

The map is the extant western third of a world map drawn on gazelle skin, with dimensions reported as 90 cm × 63 cm, 86 cm × 60 cm, 90 cm × 65 cm, 85 cm × 60 cm, 87 cm × 63 cm, and 86 cm × 62 cm. The surviving portion primarily details the western coast of Africa and the eastern coast of South America. The map was signed by Piri Reis, an Ottoman-Turkish admiral, geographer and cartographer, and dated to the month of Muharram in the Islamic year 919 AH, equivalent to 1513 CE. It was presented to Ottoman Sultan Selim I in 1517. In the map's legend, Piri inscribed that the map was based on about twenty charts and mappae mundi. According to Piri, these maps included eight Ptolemaic maps constructed during the era of Alexander the Great, an Arabic map of India, four newly drawn Portuguese maps of their recent discoveries, and a map by Christopher Columbus of the western lands. From Inscription 6 on the map:

From eight Jaferyas of that kind and one Arabic map of Hind [India], and from four newly drawn Portuguese maps which show the countries of Sind [now in modern day Pakistan], Hind and Çin [China] geometrically drawn, and also from a map drawn by Qulunbu [Columbus] in the western region, I have extracted it. By reducing all these maps to one scale this final form was arrived at, so that this map of these lands is regarded by seamen as accurate and as reliable as the accuracy and reliability of the Seven Seas on the aforesaid maps."

There is some scholarly debate over whether the 20 charts and mappae mundi in Piri's inscriptions includes the eight Ptolemaic maps, the four Portuguese maps, the Arabic map and the Columbus map. From one perspective, the number of charts and mappae mundi used by Piri equals 20, while in the other, it could mean a total of 34. Some have claimed that the source maps were found in the ancient Library of Alexandria, based on Piri's allusions to Alexander the Great, the founder of Alexandria, Ptolemy I, who ruled Alexandria in the 4th century BCE, and Claudius Ptolemy, the Greek geographer and cartographer who lived in Alexandria during the second century CE.

The map was discovered on November 29, 1929, while TopkapÄ± Palace was being converted into a museum, by museum director Halil Ethem. It drew immediate attention as it was one of the earliest maps of America, and the only 16th century map that showed South America in its proper longitudinal position in relation to Africa. Furthermore, Piri's claim that he had based some portions of the map on a map drawn by Columbus also drew special attention, as geographers had spent several centuries unsuccessfully searching for a "lost map of Columbus" that was supposedly drawn while he was in the West Indies.

After reading about the map's discovery in the The Illustrated London News, United States Secretary of State Henry L. Stimson contacted the United States Ambassador to Turkey Charles H. Sherrill and requested that an investigation be launched to find the Columbus source map, which he believed may have been in Turkey. In turn, the Turkish government complied with Stimson's request, but they were unsuccessful in locating any of the source maps. The Piri Reis map is currently located in the Library of the TopkapÄ± Palace in Istanbul, Turkey, but is not usually on display to the public.