Image: The Skalholt-map made by the icelandic teacher Sigurd Stefansson (1570) 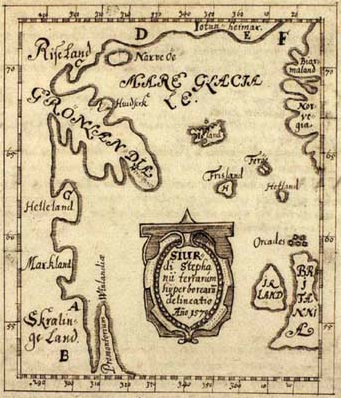 Displaying image 31 of 65 images in Archaeology.

Description Greenlands from Bjørn Jonsen of Skarsaa in Iceland from the year 1669, latin by Theodor Thorlac (Note latitude errors by Stefansson: 55N instead of 50N, etc). 16th century Icelanders realised that the "New World" which European geographers were calling "America" was the land described in their Vinland Sagas. The Skálholt Map, drawn in 1570 or 1590 but surviving only through later copies, shows Promontorium Winlandiae ("promontory/cape/foreland of Vinland") as a narrow cape with its northern tip at the same latitude as southern Ireland (NB: the scales of degrees in the map margins are inaccurate). This effective identification of northern Newfoundland with the northern tip of Vinland was taken up by later Scandinavian scholars such as bishop Hans Resen.

Although it it generally agreed, based on the saga descriptions, that Helluland includes Baffin Island, and Markland represents at least the southern part of the modern Labrador, there has been considerable controversy over the location of the actual Norse landings and settlement. Comparison of the sagas, as summarised above, shows that they give similar descriptions and names to different places. One of the few reasonably consistent pieces of information is that exploration voyages from the main base sailed down both the east and west coasts of the land; this was one of the factors which helped archaeologists locate the site at L'Anse Aux Meadows, at the tip of Newfoundland's long northern peninsula.