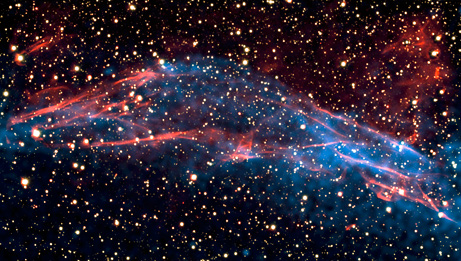 Displaying image 232 of 363 images in Astronomy.

In June scientists with the Chandra X-ray Observatory released this picture of a shock wave plowing through the supernova remnant RCW 86, seen above in both x-ray and visible light. Although the shock wave is moving rapidly, its energy is not heating the surrounding gas as much as it should, scientists say. The new image shows that the extra energy is instead powering up particles and firing them out into space at nearly the speed of light.