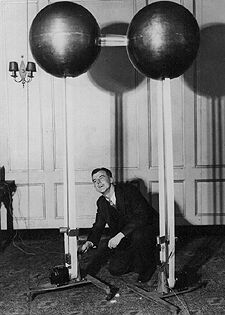 In 1929 Van de Graaff returned to the United States to join the Palmer Physics Laboratory at Princeton University as a National Research Fellow. In the fall of that year he constructed the first working model of his electrostatic accelerator which developed 80,000 volts. Improvements were made to the basic design and in November, 1931 at the inaugural dinner of the American Institute of Physics, a demonstration model was exhibited that produced over 1,000,000 volts. The invention was reported at a meeting of the American Physical Society in 1931.