Brigham Young University (BYU), sometimes referred colloquially as The Y, is a private research university located in Provo, Utah, United States. It is owned and operated by The Church of Jesus Christ of Latter-day Saints (LDS Church), and excluding online students, is the largest religious university and the third largest private university in the United States, with 33,363 on-campus students. Approximately 99 percent of the students are members of the LDS Church, and one-third of its U.S. students are from Utah.

Students attending BYU are required to follow an honor code, which mandates behavior in line with LDS teachings such as academic honesty, adherence to dress and grooming standards, and abstinence from extramarital sex and from the consumption of drugs and alcohol. Many students (88 percent of men, 39 percent of women) either delay enrollment or take a hiatus from their studies to serve as Mormon missionaries. An education at BYU is also less expensive than at similar private universities, since "a significant portion" of the cost of operating the university is subsidized by the church's tithing funds. 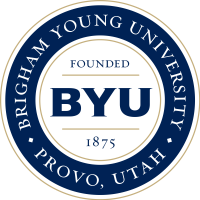 See all Providers
NOTE: CosmoLearning is not affiliated or endorsed by Brigham Young University. This page is only intended to credit this content provider for their educational content being included on the CosmoLearning site.