In May 2015, Franklin Barbecue owner Aaron Franklin was awarded a James Beard Foundation Award for Best Chef: Southwest. He is the only chef who specializes in barbecue to ever be nominated, or receive, the award. 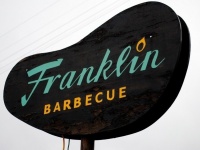 See all Providers
NOTE: CosmoLearning is not affiliated or endorsed by Franklin Barbecue. This page is only intended to credit this content provider for their educational content being included on the CosmoLearning site.