With an $11.4 trillion national debt and $55 trillion in unfunded obligations for programs such as Social Security, Medicare and Medicaid, it is our belief that the United States for all intents and purposes is bankrupt and Americans need to take steps immediately to protect themselves from the potential loss of the purchasing power of their U.S. Dollars.

With total United States Federal Reserve and Treasury bailout commitments now at $14.1 trillion, of which $3.7 trillion has already been spent, we believe the largest financial crisis in history is ahead of us as a direct result of the U.S. government unwilling to accept a much needed recession.

It is our belief that foreigners will eventually stop lending the U.S. money and the Federal Reserve will most likely have to print the money to fund our deficit spending out of thin air.

The U.S. has abused its status of having the world's reserve currency for far too long. With the potential for China to become a net seller of U.S. Treasuries to fund their own rightfully deserved stimulus plans, we believe there will soon be a run on the U.S. Dollar and a rush into hard assets like Gold and Silver.

Our goal is to help as many Americans as possible become aware of the disaster we are rapidly approaching. In our opinion, the wealth of most Americans could get wiped out during the next decade, but it will be an opportunity for a small percentage of Americans to become wealthy by investing into companies that historically have prospered in an inflationary environment, such as Gold and Silver miners and Agriculture producers. 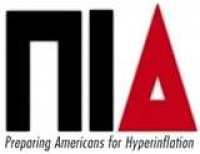 See all Providers
NOTE: CosmoLearning is not affiliated or endorsed by National Inflation Association. This page is only intended to credit this content provider for their educational content being included on the CosmoLearning site.