The University of Sheffield was originally formed by the merger of three colleges. The Sheffield School of Medicine was founded in 1828, followed in 1879 by the opening of Firth College by Mark Firth, a steel manufacturer, to teach arts and science subjects. Firth College then helped to fund the opening of the Sheffield Technical School in 1884 to teach applied science, the only major faculty the existing colleges did not cover. The three institutions merged in 1897 to form the University College of Sheffield. Sheffield is one of the six red brick universities.

It was originally envisaged that the University College would join Manchester, Liverpool and Leeds as the fourth member of the federal Victoria University.

From 200 full-time students in 1905, the University grew slowly until the 1950s and 1960s when it began to expand rapidly. Many new buildings (including the famous Arts Tower) were built and student numbers increased to their present


Courses Offered by University of Sheffield (1) 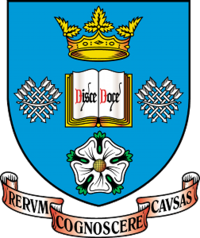 See all Providers
NOTE: CosmoLearning is not affiliated or endorsed by University of Sheffield. This page is only intended to credit this content provider for their educational content being included on the CosmoLearning site.