Independently, Confucius, Mencius, Mozi and the Legalist school in China, and the Laws of Manu and Chanakya in India, all sought to find means of restoring political unity and political stability; in the case of the former three through the cultivation of virtue, in the last by imposition of discipline. In India, Chanakya, in his Arthashastra, developed a viewpoint which recalls both the Legalists and Niccolò Machiavelli. Ancient Chinese civilization and Indian civilization resembled Greek civilization in that there was a unified culture divided into rival states. In the case of China, philosophers found themselves obliged to confront social and political breakdown, and seek solutions to the crisis that confronted their entire civilization.

The early Christian philosophy of Augustine of Hippo was by and large a rewrite of Plato in a Christian context. The main change that Christian thought brought was to moderate the Stoicism and theory of justice of the Roman world, and emphasize the role of the state in applying mercy as a moral example. Augustine also preached that one was not a member of his or her city, but was either a citizen of the City of God (Civitas Dei) or the City of Man (Civitas Terrena). Augustine's City of God is an influential work of this period that refuted the thesis, after the First Sack of Rome, that the Christian view could be realized on Earth at all - a view many Christian Romans held. 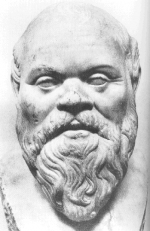