The Apollo program was designed to land humans on the Moon and bring them safely back to Earth. Six of the missions (Apollos 11, 12, 14, 15, 16, and 17) achieved this goal. Apollos 7 and 9 were Earth orbiting missions to test the Command and Lunar Modules, and did not return lunar data. Apollos 8 and 10 tested various components while orbiting the Moon, and returned photography of the lunar surface. Apollo 13 did not land on the Moon due to a malfunction, but also returned photographs. The six missions that landed on the Moon returned a wealth of scientific data and almost 400 kilograms of lunar samples. Experiments included soil mechanics, meteoroids, seismic, heat flow, lunar ranging, magnetic fields, and solar wind experiments.

First human landing on the Moon

On January 27, 1967, tragedy struck the Apollo program, nearly derailing the goal of landing an American on the Moon by the end of the decade. A fire took place on the launch pad during a preflight test for Apollo 1 (AS-204), which was scheduled to be the first Apollo manned mission, and would have been launched on February 21, 1967. Astronauts Virgil Grissom, Edward White, and Roger Chaffee lost their lives when a fire swept through the Command Module (CM). The exhaustive investigation of the fire and extensive reworking of the CMs postponed any manned launch until NASA officials cleared the CM for manned flight. Saturn IB schedules were suspended for nearly a year, and the launch vehicle that finally bore the designation AS-204 carried a Lunar Module (LM) as the payload, not the Apollo CM. The missions of AS-201 and AS-202 with Apollo spacecraft aboard had been unofficially known as Apollo 1 and Apollo 2 missions (AS-203 carried only the aerodynamic nose cone). In the spring of 1967, NASA's Associate Administrator for Manned Space Flight, Dr. George E. Mueller, announced that the mission originally scheduled for Grissom, White, and Chaffee would be known as Apollo 1, and said that the first Saturn V launch, scheduled for November 1967, would be known as Apollo 4. The eventual launch of AS-204 became known as the Apollo 5 mission (no missions or flights were ever designated Apollo 2 and 3). The second launch of a Saturn V took place on schedule in the early morning of April 4, 1968. Known as AS-502, or Apollo 6, the flight was a success, though two first-stage engines shut down prematurely, and the third-stage engine failed to re-ignite after reaching orbit.

Apollo 7 was a confidence-builder. After the January 1967 Apollo launch pad fire, the Apollo Command Module had been extensively redesigned. Schirra, the only astronaut to fly Mercury, Gemini, and Apollo missions, commanded this Earth-orbital shakedown of the Command and Service Modules. With no lunar lander, Apollo 7 was able to use the Saturn IB booster rather than the giant Saturn V. The Apollo hardware and all mission operations worked without any significant problems, and the Service Propulsion System (SPS)—the all-important engine that would place Apollo in and out of lunar orbit—made eight nearly perfect firings. Even though Apollo’s larger cabin was more comfortable than Gemini’s, eleven days in orbit took its toll on the astronauts. The food was bad, and all three developed colds. But their mission proved the spaceworthiness of the basic Apollo vehicle.

The Apollo 8 astronauts were the first human beings to venture beyond low-Earth orbit and visit another world. What was originally to have been an Earth-orbit checkout of the lunar lander became instead a race with the Soviets to become the first nation to orbit the Moon. The Apollo 8 crew rode inside the Command Module, with no lunar lander attached. They were the first astronauts to be launched by the Saturn V, which had flown only twice before. The booster worked perfectly, as did the SPS engines that had been checked out on Apollo 7. Apollo 8 entered lunar orbit on the morning of December 24, 1968. For the next 20 hours, the astronauts circled the Moon, which appeared out their windows as a gray, battered wasteland. They took photographs, scouted future landing sites, and on Christmas Eve read from the Book of Genesis to TV viewers back on Earth. They also photographed the first Earthrise as seen from the Moon. Apollo 8 proved the ability to navigate to and from the Moon, and gave a tremendous boost to the entire Apollo program.

Apollo 9 was the first space test of the third critical piece of Apollo hardware—the lunar module. For ten days, the astronauts put all three Apollo vehicles through their paces in Earth orbit, undocking and then redocking the lunar lander with the Command Module, just as they would in lunar orbit. For this and all subsequent Apollo flights, the crews were allowed to name their own spacecraft. The gangly lunar module was "Spider," the command module "Gumdrop." Schweickart and Scott performed a spacewalk, and Schweickart checked out the new Apollo spacesuit, the first to have its own life support system rather than being dependent on an umbilical connection to the spacecraft. Apollo 9 gave proof that the Apollo machines were up to the task of orbital rendezvous and docking.

This dress rehearsal for a Moon landing brought Stafford and Cernan’s Lunar Module (LM)—nicknamed "Snoopy"—to within nine miles of the lunar surface. Except for that final stretch, the mission went exactly as a landing would have, both in space and on the ground, where Apollo’s extensive tracking and control network was put through a dry run. Shortly after leaving low Earth orbit, the LM and the Command/Service Module separated, then redocked, top to top. Upon reaching lunar orbit, they separated again. While Young orbited the Moon alone in his Command Module "Charlie Brown," Stafford and Cernan checked out the LM’s radar and ascent engine, rode out a momentary gyration in the lunar lander’s motion (due to a faulty switch setting), and surveyed the Apollo 11 landing site in the Sea of Tranquility. This test article of the LM was not equipped to land, however. Apollo 10 also added another first—broadcasting live color TV from space.

(based on the IAU Mean Earth Polar Axis coordinate system)

Half of Apollo’s primary goal—a safe return—was achieved at 4:17 p.m. Eastern Daylight Time on July 20, when Armstrong piloted "Eagle" to a touchdown on the Moon, with less than 30 seconds worth of fuel left in the Lunar Module. Six hours later, Armstrong took his famous "one giant leap for mankind." Aldrin joined him, and the two spent two-and-a-half hours drilling core samples, photographing what they saw, and collecting rocks. After more than 21 hours on the lunar surface, they returned to Collins on board "Columbia," bringing 20.87 kilograms of lunar samples with them. The two Moon-walkers had left behind scientific instruments, an American flag, and other mementos, including a plaque bearing the inscription: "Here Men From Planet Earth First Set Foot Upon The Moon. July 1969 A.D. We Came In Peace For All Mankind."

The second lunar landing was an exercise in precision targeting. The descent was automatic, with only a few manual corrections by Conrad. The landing, in the Ocean of Storms, brought the Lunar Module "Intrepid" within walking distance—182.88 meters—of a robot spacecraft that had touched down there two-and-a-half years earlier. Conrad and Bean brought pieces of the Surveyor 3 back to Earth for analysis, and took two Moon-walks lasting just under four hours each. They collected rocks and set up experiments that measured the Moon’s seismicity, solar wind flux, and magnetic field. Meanwhile Gordon, on board the "Yankee Clipper" in lunar orbit, took multispectral photographs of the surface. The crew stayed an extra day in lunar orbit taking photographs. When "Intrepid’s" ascent stage was dropped onto the Moon after Conrad and Bean rejoined Gordon in orbit, the seismometers the astronauts had left on the lunar surface registered the vibrations for more than an hour.

The crew’s understated radio message to Mission Control was "Okay, Houston, we’ve had a problem here." Within 321,860 kilometers of Earth, an oxygen tank in the Service Module exploded. The only solution was for the crew to abort their planned landing, swing around the Moon, and return on a trajectory back to Earth. Because their command module "Odyssey" was almost completely dead, however, the three astronauts had to use the Lunar Module "Aquarius" as a crowded lifeboat for the return home. The four-day return trip was cold, uncomfortable, and tense. But Apollo 13 proved the program’s ability to weather a major crisis and bring the crew back home safely.

After landing in the Fra Mauro region—the original destination for Apollo 13—Shepard and Mitchell took two Moon-walks, adding new seismic studies to the by-now familiar Apollo experiment package, and using a "lunar rickshaw" pull-cart to carry their equipment. A planned rock-collecting trip to the 1,000-foot-wide Cone Crater was dropped, however, when the astronauts had trouble finding their way around the lunar surface. Although later estimates showed that they had made it to within 30.48 meters of the crater’s rim, the explorers had become disoriented in the alien landscape. Roosa, meanwhile, took pictures from on board the Command Module "Kitty Hawk" in lunar orbit. On the way back to Earth, the crew conducted the first U.S. materials processing experiments in space. The Apollo 14 astronauts were the last lunar explorers to be quarantined on their return from the Moon.

The first of the longer, expedition-style lunar landing missions was also the first to include the lunar rover, a carlike vehicle that extended the astronauts’ range. The Lunar Module "Falcon" touched down near the sinuous channel known as Hadley Rille. Scott and Irwin rode more than 27.36 kilometers in their rover, and had a free hand in their geological field studies compared to earlier lunar astronauts. They brought back one of the prize trophies of the Apollo program—a sample of ancient lunar crust nicknamed the "Genesis Rock." Apollo 15 also launched a small subsatellite for measuring particles and fields in the lunar vicinity. On the way back to Earth, Worden, who had flown solo on board "Endeavor" while his crewmates walked on the surface, conducted the first spacewalk between Earth and the Moon to retrieve film from the side of the spacecraft.

A malfunction in the main propulsion system of the Lunar Module "Orion" nearly caused their Moon landing to be scrubbed, but Young and Duke ultimately spent three days exploring the Descartes highland region, while Mattingly circled overhead in "Casper." What was thought to have been a region of volcanism turned out not to be, based on the astronauts’ discoveries. Their collection of returned specimens included a 11.34-kilogram chunk that was the largest single rock returned by the Apollo astronauts. The Apollo 16 astronauts also conducted performance tests with the lunar rover, at one time getting up to a top speed of 17.70 kilometers per hour.

At the end of this last Apollo mission Eugene Cernan earned the distinction of becoming the last human to stand on the Moon -- so far. While Ronald Evans circled in America, Jack Schmitt and Cernan collected a record 108.86 kilograms of rocks during three Moon-walks. The crew roamed for 33.80 kilometers through the Taurus-Littrow valley in their rover, discovered orange-colored soil, and left behind a plaque attached to their lander "Challenger," which read: "Here Man completed his first exploration of the Moon, December 1972 A.D. May the spirit of peace in which we came be reflected in the lives of all mankind." The Apollo lunar program had ended. 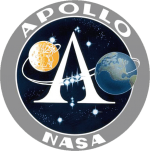