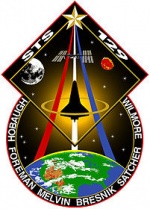 For the mission patch of STS-129, the sun shines brightly on the International Space Station above and the United States below representing the bright future of U.S. human spaceflight. Image: NASA