The mission featured three spacewalks performed by Mastracchio and Anderson. They replaced an ammonia tank assembly, retrieved a Japanese experiment from the station’s exterior and switched out a rate gyro assembly on the S0 element of the station’s truss.

STS-131 was the 33rd shuttle mission to the station. 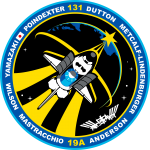