Space observatories are instruments in outer space which is used for observation of distant planets, galaxies, and other outer space objects. This category is distinct from other observatories located in space that are pointed toward the earth for the purpose of reconnaissance and other types of information gathering.

A large number of observatories have been launched into orbit, and most of them have greatly enhanced our knowledge of the Cosmos. Performing astronomy from the Earth's surface is limited by the filtering and distortion of electromagnetic radiation due to the Earth's atmosphere. This makes it desirable to place astronomical observation devices into space. As a telescope orbits the Earth outside the atmosphere it is subject neither to twinkling (distortion due to thermal turbulences of the air) nor to light pollution from artificial light sources on the Earth. Some terrestrial telescopes (such as the Very Large Telescope) can counter turbulences with the help of their novel adaptive optics.

But space-based astronomy is even more important for frequency ranges which are outside of the optic window and the radio window, the only two wavelength ranges of the electromagnetic spectrum that are not severely attenuated by the atmosphere. For example, X-ray astronomy is nearly impossible when done from the Earth, and has reached its current important stand within astronomy only due to orbiting satellites with X-ray telescopes such as the Chandra observatory or XMM-Newton observatory. Infrared and ultraviolet are also greatly blocked.

Space observatories can generally be divided into two classes: missions which map the entire sky (surveys), and observatories which make observations of chosen parts of the sky.

Many space observatories have already completed their missions, while others are still operating. Satellites have been launched and operated by NASA, ESA, Japanese Space Agency and the Soviet space program later succeeded by Roskosmos of Russia. 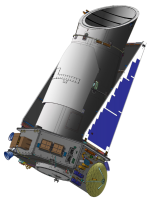