The exploration of Mars has been an important part of the space exploration programs of the Soviet Union (later Russia), the United States, Europe, and Japan. Dozens of robotic spacecraft, including orbiters, landers, and rovers, have been launched toward Mars since the 1960s. These missions were aimed at gathering data about current conditions and answering questions about the history of Mars. The questions raised by the scientific community are expected to not only give a better appreciation of the red planet but also yield further insight into the past, and possible future, of Earth.

The exploration of Mars has come at a considerable financial cost with roughly two-thirds of all spacecraft destined for Mars failing before completing their missions, with some failing before they even begin. Such a high failure rate can be attributed to the complexity and large number of variables involved in an interplanetary journey, and has led researchers to jokingly speak of The Great Galactic Ghoul [1] which subsists on a diet of Mars probes. This phenomenon is also informally known as the Mars Curse. [2] As of August 2009, there are two functioning pieces of equipment on the surface of Mars beaming signals back to Earth: the Spirit rover and the Opportunity rover. 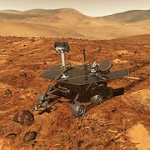 Computer-generated image of one of the two Mars Exploration Rovers which touched down on Mars in 2004.