Latin America (Spanish: América Latina or Latinoamérica; Portuguese: América Latina; French: Amérique latine) is a region of the Americas where Romance languages (i.e., those derived from Latin) – particularly Spanish, Portuguese, and variably French – are primarily spoken. Latin America has an area of approximately 21,069,501 km² (7,880,000 sq mi), almost 3.9% of the Earth's surface or 14.1% of its land surface area. As of 2008, its population was estimated at more than 569 million.

Latin America and the Caribbean Countries:

Saint Vincent and the Grenadines 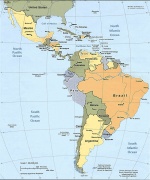