(based on the IAU Mean Earth Polar Axis coordinate system)


The purpose of the Apollo 11 mission was to land men on the lunar surface and to return them safely to Earth. The crew was Neil A. Armstrong, commander; Michael Collins, Command Module pilot; and Edwin E. Aldrin Jr., Lunar Module pilot.

After launch, the spacecraft was inserted into lunar orbit about 76 hours into the mission. After a rest period, Armstrong and Aldrin entered the Lunar Module preparing for descent to the lunar surface. The two spacecraft were undocked at about 100 hours, when the Command and Service Modules separated from the Lunar Module. The spacecraft landed in the Sea of Tranquillity at 4:18 p.m. EDT. Afterwards, they ate their first meal on the Moon and decided to begin the surface operations earlier than planned.

After lunar ascent, the Lunar Module docked with the Command and Service Modules at 128 hours. The crew transferred into the Command and Service Modules, the ascent stage was jettisoned and they prepared for trans-Earth injection. Only one midcourse correction was required, and passive thermal control was used for most of trans-Earth coast. Bad weather made it necessary to move the splashdown point 346 kilometers (215 miles) downrange. Atmospheric entry phase was normal, and the command module landed in the Pacific Ocean at 195¼ hours. The landing coordinates, as determined from the onboard computer, were 13 degrees 30 minutes north latitude and -169 degrees 15 minutes east longitude.

With the success of Apollo 11, the national objective to land men on the Moon and return them safely to Earth had been accomplished.

Half of Apollo’s primary goal—a safe return—was achieved at 4:17 p.m. Eastern Daylight Time on July 20, when Armstrong piloted "Eagle" to a touchdown on the Moon, with less than 30 seconds worth of fuel left in the Lunar Module. Six hours later, Armstrong took his famous "one giant leap for mankind." Aldrin joined him, and the two spent two-and-a-half hours drilling core samples, photographing what they saw, and collecting rocks. After more than 21 hours on the lunar surface, they returned to Collins on board "Columbia," bringing 20.87 kilograms of lunar samples with them. The two Moon-walkers had left behind scientific instruments, an American flag, and other mementos, including a plaque bearing the inscription: "Here Men From Planet Earth First Set Foot Upon The Moon. July 1969 A.D. We Came In Peace For All Mankind." 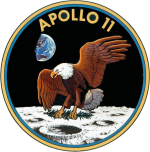