Art history has historically been understood as the academic study of objects of art in their historical development and stylistic contexts, i.e. genre, design, format, and look. This includes the "major" arts of painting, sculpture, and architecture as well as the "minor" arts of ceramics, furniture, and other decorative objects. The historical backbone of the discipline is a celebratory chronology of beautiful creations funded by upper class men in western Europe. Such a "canon" remains prominent, as indicated by the selection of objects present in art history textbooks. Nonetheless, since the mid-20th century there has been an effort to re-define the discipline to be more inclusive of non-Western art, art made by women, and vernacular creativity.

As a term, Art history (also history of art) encompasses several methods of studying the visual arts; in common usage referring to works of art and architecture. Aspects of the discipline overlap. As the art historian Ernst Gombrich once observed, "the field of art history [is] much like Caesar's Gaul, divided in three parts inhabited by three different, though not necessarily hostile tribes: (i) the connoisseurs, (ii) the critics, and (iii) the academic art historians".

As a discipline, art history is distinguished from art criticism, which is concerned with establishing a relative artistic value upon individual works with respect to others of comparable style, or sanctioning an entire style or movement; and art theory or "philosophy of art", which is concerned with the fundamental nature of art. One branch of this area of study is aesthetics, which includes investigating the enigma of the sublime and determining the essence of beauty. Technically, art history is not these things, because the art historian uses historical method to answer the questions: How did the artist come to create the work?, Who were the patrons?, Who were his or her teachers?, Who was the audience?, Who were his or her disciples?, What historical forces shaped the artist's oeuvre, and How did he or she and the creation, in turn, affect the course of artistic, political, and social events?

This is not to say that art history is only a biographical endeavor. In fact, art historians often root their studies in the close scrutiny of individual objects. They thus attempt to answer in historically specific ways, questions such as: What are key features of this style?, What meaning did this object convey?, How does it function visually?, Did the artist meet their goals well?, What symbols are involved?, and Does it function discursively?

Art history as we know it today began in the nineteenth century but has precedents dating to the ancient world. Like the analysis of historical trends in politics, literature, and the sciences, the discipline benefits from the clarity and portability of the written word, but art historians also rely on formal analysis, semiotics, psychoanalysis and iconography. Advances in photographic reproduction and printing techniques after World War II increased the ability of reproductions of artworks. Such technologies have helped to advance the discipline in profound ways, as they have enabled easy comparisons of objects. The study of visual art thus described, can be a practice that involves understandingcontext, form, and social significance. 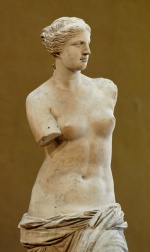 Venus de Milo on display at the Louvre